Michael: "T, you gotta get out of here."
Trevor: "Ain't gonna leave you, Mikey!"
―Michael and Trevor after Michael is shoot by Dave Norton.

Prologue is the first mission in Grand Theft Auto V, involving Michael Townley and Trevor Philips . It is set in 2004, in the town of Ludendorff, North Yankton.

In 2004, Michael Townley, Trevor Philips and Brad Snider rob a bank in Ludendorff. After locking several hostages in a closet, Trevor wires an explosive to the vault doors, and Michael detonates them via his cellphone. Michael and Trevor enter the vault and steal just under $200,000. As the team make their escape, Michael is held at gunpoint by a security guard, who also removes the mask from his head. Michael advises the guard to forget what he saw and leave, but Trevor shoots him in the head.

The trio blow open another door and exit the bank, but are swarmed by police. A massive gunfight erupts, leaving a large number of the police officers dead. The men reach their getaway vehicle and proceed to drive away, but they are pursued by more officers, and their hired getaway driver is shot in the head. Michael pushes his body out of the door and grabs the wheel, ramming their pursuers' car into a roadside tree. The group continues towards the helicopter waiting for them, but are forced to change course after encountering a police roadblock. They then cross over train tracks, but are clipped by an oncoming train, causing them to lose control and crash their SUV into a tree. The three survive, and Trevor suggests an alternative route to their chopper, but Michael insists that they stick to the plan.

The group continue on foot through the town, but realize the chopper is nowhere to be seen. An FIB agent, hiding around a corner, shoots Brad, mortally wounding him. The agent fires again, this time at Michael. He behaves injured, although no blood is seen on him. An enraged Trevor begins firing at the approaching police, refusing to leave his team behind, but Michael convinces him to leave. Pursued by armed locals, Trevor escapes into the snowy fields.

Some time later, in a North Yankton cemetery, a funeral for Michael is held. The agent who shot him supervises the proceedings, whilst Michael himself watches from the distance and flicks away his cigarette. 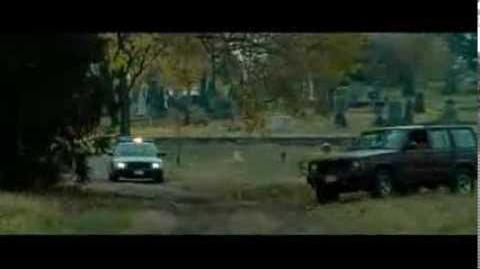 Man on a ledge SUV Chase (GTA V Prologue inspiration)
Scene from the movie Man on a Ledge , where an SUV is chased by the police and then hit by a train.

Michael and Brad at the start of the mission.

Michael in the mission.

The explosion of bank vault.

The team running from the police.

The team running from the police.

Trevor and the rest of the team down from the van.

Trevor taking cover from the cops.
Add a photo to this gallery
Retrieved from "https://gta.fandom.com/wiki/Prologue?oldid=627048"
Community content is available under CC-BY-SA unless otherwise noted.