Michael: "Alright, everybody pays attention, no one gets hurt."
Trevor: "Aarrgh! Open the door, or they'll get worse than hurt!"
―Michael's and Trevor's first phrases.

Prologue is the first mission in Grand Theft Auto V, involving Michael Townley and Trevor Philips. It is set in 2004 in the town of Ludendorff, North Yankton.

In 2004, Michael Townley, Trevor Philips and Brad Snider rob a Bobcat Security cash storage facility in Ludendorff. After locking several hostages including an unnamed Bobcat guard in a room, Trevor wires an explosive to the vault doors, and Michael detonates them via his phone. Michael and Trevor enter the vault and steal just under $180,000. As the crew make their escape, Michael is held at gunpoint by Jaspers, another Bobcat security guard, who also removes the mask from his head. Michael advises the guard to forget what he saw and leave, but Trevor shoots him in the head.

The trio blow open another door and leave the building, but are immediately swarmed by the local law enforcement. A dead security guard with a gunshot wound in his head can be seen inside the checkpoint booth at the facility gate. A massive gunfight erupts, forcing the crew to fend off the oncoming police before making their escape. The crew reach their getaway vehicle and are driven away, but they are pursued by more police vehicles, and their hired local getaway driver is shot in the head. Michael pushes his body out of the door and grabs the wheel, crashing their pursuers' car into a roadside tree. The crew continues their journey towards the helicopter awaiting for them, but are forced to divert their course after encountering a police roadblock. They then speed over the train tracks, but aren't quick enough and the rear end of the vehicle is hit by an oncoming train, causing them to lose control and spin out into a nearby tree. The trio survive, and Trevor suggests an alternative route to the getaway chopper, but Michael insists that they stick to the original plan.

The crew then continues on foot through the town, but realize the chopper is nowhere to be seen. Meanwhile, FIB Agent Dave Norton, who is hiding around a corner, aims at Trevor with a Sniper Rifle, then shoots Brad as he walks into the path of the bullet. Dave fires again, this time at Michael, who falls to the ground. He behaves as if he is critically injured and bleeding out, though he has no visible injuries. Trevor is forced to take out the oncoming police officers alone, refusing to abandon his crew, but Michael persuades Trevor to go on without him. After briefly taking a nearby woman hostage, Trevor escapes into the snowy fields while still being pursued by armed police.

Some time later, at a local cemetery, a funeral for Michael Townley is held. Dave Norton, the agent who "shot" him, supervises the proceedings, whilst Michael himself observes from a distance and flicks away his cigarette.

The next mission, Franklin and Lamar, will automatically begin after the introductory theme.

Go to the guard.

After the beginning cutscene, Trevor kicks the door open and the player gains control of Michael. The player has to go to the guard which will trigger the next cutscene.

To prevent unnecessary ragdoll, the player is unable to jump at this point of the mission. If the player takes too long to approach the guard, Trevor and Brad will make continuous insults towards Michael, claiming they're losing time. Despite this, the mission will not fail, regardless of how long they take or wait. From this point on, killing any of the hostages will, however, fail the mission.

Aim at the hostages to make them move.

Michael is unable to move during this sequence, and is only able to aim and shoot with his weapon. He can selectively pick which of the hostages enter the closet first, pointing the selected weapon at the individual hostages will result in each of them independently entering the closet. If the player leaves any behind and waits, Brad will force them to go in. The player is still able to shoot the hostages dead, which will fail the mission.

After forcing them into the room, Michael is able to move around again and also able to jump.

Use the phone to trigger the explosive charge.

When all hostages are locked away, Trevor returns and will tell Michael to detonate the bomb. The player has to take out the cellphone and dial a "Detonate" contact. After dialing "Detonate" a cutscene will show the vault door being blown open.

Michael's position after the detonation will be fixed to the back of the door, regardless of where the player operated the phone.

The player has to walk to the vault and pick up the cash when the cutscene ends. The cash is on a trolley in far corner of the room. Cash on the ground is worth $500, totaling to $2,500, and picking it up is optional.

Take out the guard.

Once the cash is collected, Michael is taken hostage by a security guard during a brief cutscene. The player has to switch to Trevor and kill the guard. If the player takes no action or shoots the guard anywhere other than the head, Michael will die, failing the mission.

Once the guard is taken care of, the crew will proceed further to the exit. The player needs to take cover so that Brad will plant the explosive charges on the door.

After the door is blown up, the next task is to open the shutter door. Walking near the switch will make the player lose control of Trevor who hits the shutter switch automatically, and as such no interaction is necessary. The player receives five wanted stars and has to fight through waves of North Yankton State Patrol officers. First wave consists of two Police Roadcruisers, one Police Rancher, and three on-foot officers. Each vehicle contains two officers.

Return to the crew.

This objective only appears if the player attempts to abandon the crew at any time from the beginning of the shootout up until entering the getaway vehicle. Mission will fail if the player does not return to the crew on time or continues to walk further away from the crew.

Get to the car.

Wait for the crew.

This objective only appears if the player does not take out the final two officers and goes directly to the getaway vehicle. The player will be able to enter the getaway car once there are no more police officers alive.

Drive to the helicopter pick up point.

After the cutscene, Michael gets control of the getaway car and has to drive forwards to the helicopter pick up point. The player is clear of any wanted level, but if the player hits oncoming Police Roadcruisers the wanted level will be reinstated. Wanted level will, either way, be reinstated at the roadblock further down the road. The player only has to follow the GPS route on the minimap. After turning right, halfway towards the marker, a cutscene will trigger where the car gets hit by a train and Michael and Brad get shot. Turning back, going off route or getting the car stuck will fail the mission.

Get back in the car.

This objective only appears if the player decides to leave the getaway car. Regardless of the distance, the player will fail the mission after ten seconds of being outside the car.

Hold off the Cops.

This mission will fail at any point if the player dies, kills the crew or hostages, abandons the crew, the route, or the car, makes the car undriveable, runs out of ammo, or if the cops kill Michael, Trevor or Brad before the end of the mission. It is not possible to get Busted during the mission. The player will also be allowed to enter and play Grand Theft Auto Online.

This article or section needs to be cleaned up to meet the standards of the GTA Wiki.
The shootout section dialogue seems to be randomized, there is more dialogue between the guard, Michael and Trevor if the player decides to wait longer to shoot the guard.

This section/page depicts all cutscenes and dialogues in the mission "Prologue" in Grand Theft Auto V.

The soundtrack that plays during Prologue is named "Vacuum", also named "North Yankton Memories" on The Music of Grand Theft Auto V "The Score". This specific soundtrack is a slightly different variation of the regular Vacuum OST as it has a different intro fade-in, which fits in with the introduction of the mission. The soundtrack is also heard, albeit with several different stems from other soundtracks, at the beginning of the Grand Theft Auto V Official Gameplay Trailer. This soundtrack has arguably become one of the game's most influential themes given its first appearance.

The crew takes cover as the bomb explodes.

Brad holds the hostage down.

Michael about to detonate the bomb.

The vault after the explosion.

Trevor and Michael taking cover as Brad is about to plant the bomb.

The crew takes cover as the bomb explodes.

The crew leaves the building.

Trevor arrives at the getaway car.

The crew inside the getaway car.

Trevor shoots at the police car.

The police shoots back…

…and kills the getaway driver.

Michael throws out the body and takes over the wheel…

…then he rams the police car off the road.

Michael drives to the helicopter pick up point.

A roadblock is on the way, forcing the crew to take a diversion.

Getaway car is about to be hit by the train.

The getaway car hits the tree, where it ends up totaled.

The trio discusses what to do next.

The crew looks for the chopper.

Dave Norton moves in and prepares to shoot…

…and Brad takes the bullet.

Then Michael gets shot.

Trevor fights off the cops.

One of the officers grabs the hostage and tells the others to go after Trevor.

Trevor escapes in the distance, and two officers try to shoot him.

Michael watches over his funeral. 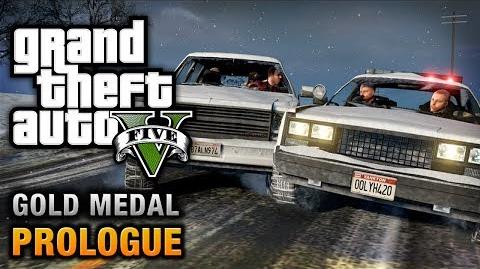 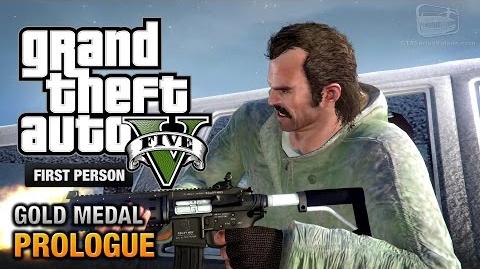 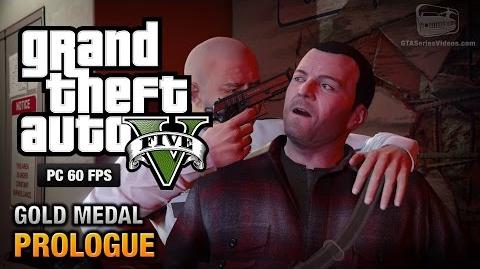