Project 4808B: Ranch is a Survival job in Grand Theft Auto Online as part of the continuation of the The Diamond Casino & Resort update, released on October 31, 2019, during the Halloween Surprise 2019 event. It takes place at the O'Neil Ranch.

Unlike normal survivals, the type of enemies changes as the player progresses through the waves; these are O'Neil Brothers on waves 1 and 2, LSSD officers on wave 3, FIB agents on wave 4 and 5, agents on waves 6 and 7, and the military on later waves. During waves, some enemies arrive in vehicles, with the O'Neil Brothers using Dune Buggies, LSSD officers using Sheriff Cruisers, FIB agents using FIB Grangers, agents using black Emperors, and the military using Crusaders. During certain waves, the enemies also use Buzzard helicopters.

The players start in front of the ranch. After this, they are free to collect pickups and find adequate cover. There are a large number of props, such as wooden boxes and containers, scattered around the ranch.

Alien eggs act as the health packs and spaceship parts as the armour pickups. The health pack are located in front of the two entrances to the house, while the two armour pickups are available inside the ranch. Like all other Alien Survivals, there are Unholy Hellbringer and Widowmaker pickups around the map, but the players can also pick up dropped weapons. 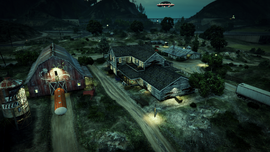 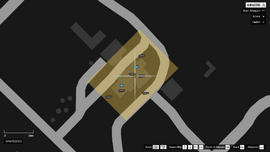 Retrieved from "https://gta.fandom.com/wiki/Project_4808B:_Ranch?oldid=1224122"
Community content is available under CC-BY-SA unless otherwise noted.