Unlike normal survivals, the type of enemies changes as the player progresses through the waves; these are Security Guards for waves 1 and 2, FBI agents for waves 3 and 4, NOOSE members for wave 5, secret agents for waves 6 and 7, and the military for later waves. During waves, some enemies arrive in vehicles, with the security guards using Security Dilettantes, FBI agents using FIB Buffalos, the NOOSE using Police Riots, agents using black Emperors, and the Military using Crusaders and Barracks. During certain waves, the enemies also use Buzzard helicopters

The players start inside the warehouse. After this, they are free to collect pickups and find adequate cover. There are a large amount of props, such as cement sacks, crates, and containers, scattered around the warehouse, as well as outside. 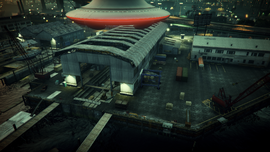 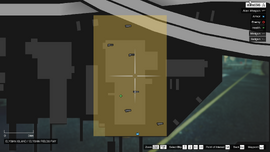 Retrieved from "https://gta.fandom.com/wiki/Project_4808A:_Terminal?oldid=1223911"
Community content is available under CC-BY-SA unless otherwise noted.