In GTA 2, the prison outfit briefly appears in the mission Penal Ties!. In this mission, Billy Bob Bean orders Claude Speed to revenge on the guards at Alma Mater Prison for his past experiences. Claude is arrested and to get inside the facility, and is given to him the prision outfit.

In GTA III, the prison outfit is worn by Claude, 8-Ball and the Oriental Gentleman in the Introduction and Give Me Liberty. However these missions are the only times all three characters wear it. And after going to the hideout Claude permanently changes into his new outfit.

In GTA Online, the Prison outfit is worn by the GTA Online Protagonist. Once again there is only one mission that it appears, and that mission is The Prison Break heist which was added in the Heists Update. The one who is selected to be the prisoner (selected by the heist leader) is dressed up in a white tank top and orange pants, and has to act like a prisoner with the Prison Officer who is selected behind him, to break out Maxim Rashkovsky.

Characters who have worn the outfit

Claude Speed in the Prison Outfit in GTA 2.

Claude in the Prison Outfit in GTA III.

The Oriental Gentleman in the Prison Outfit.

8-Ball in the Prison Outfit.

Gerald McReary in a prison suit. 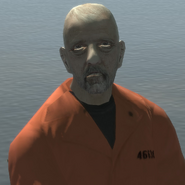 Aiden O'Malley in a prison suit.

Billy Grey and other characters in a prison suit. 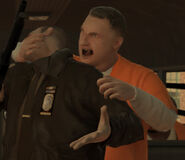 Curtis Stocker in The Lost and Damned.
Add a photo to this gallery
Retrieved from "https://gta.fandom.com/wiki/Prison_Outfit?oldid=1135869"
Community content is available under CC-BY-SA unless otherwise noted.