GTA Wiki
Register
Don't have an account?
Sign In
Advertisement
in: Pages with non-numeric formatnum arguments, Vehicles, Vehicles in The Lost and Damned,
and 9 more
English

rig_1 (All games)
“Can't decide whether to be a bus driver or a prison guard? Well, now you can be both. All the futility of repeatedly driving the same route in one of the most cumbersome vehicles ever designed, with the authority to increase prison sentences with very little accountability.”
— Warstock Cache & Carry description.

Wikipedia has an article on:
Prisoner transport vehicle

The Prison Bus takes elements from various heavy vehicles, where the cowl (hood) design is based on the International Harvester S-Series, although lacking its distinctive power bulge. The headlights and grille bear a loose resemblance to the Chevrolet Kodiak. As for the bus body, the design is loosely based on the Blue Bird CV200 body.

The vehicle's design is comparable to that of a typical American school bus, but has been modified for prison inmate transportation and protection for the Alderney State Correctional Facility. The front section bears strong similarities with the Yankee, but the bumper is much bulkier and has additional vent details on the outer sides and a Liberty City license plate attached in the center, while the end of the nose/hood has a shorter height and a slightly longer overhang. The grille is rectangular in shape and has five horizontal and three vertical elements, while the headlight housings contain square main units on the upper side and rectangular indicators on the lower side.

On the sides, the vehicle has various protruding lines passing through the lower half of the body, inward-gliding doors on the right-hand side, and dual exhaust pipes near the rear right wheel, while the upper half mostly consists of the large windshield, the square windows with three horizontal bars for the passengers, split windows for the driver, and rectangular rear-view mirrors. The roof area is rounded in shape and contains four circular hazard lights and three marker lights in the center, just above the windshield.

The rear of the vehicle mostly consists of a rear emergency door that serves as decoration and cannot be used (although it will open or detach in the event of collision or explosion), along with square windows with two horizontal bars and the same set of hazard and marker lights on the roof area. There are numerour circular tail lights on each side of the emergency door, consisting of amber units on the outer sides (that work as the main lights), red brake lights in the middle, smaller reverse units on the inner sides, and dual indicators on the lower corners. A bulky bumper can also be seen at the bottom, again with a Liberty City plate attached in the center.

The interior of the vehicle has the corresponding driver seat and ten seats for the passengers/prisoners. However, the vehicle only has capacity for the driver and three passengers like the regular Bus. The roof has a central rear-view mirror and three square lights that work in conjunction with the engine.

The vehicle is only available in a grayish light blue primary color with Alderney State Department of Corrections emblems and ASCF stencils on both sides and both ends of the roof. It also uses standard industrial wheels similar to the ones seen on the Benson, the Mule and the Phantom.

The bus returns to Grand Theft Auto V and Grand Theft Auto Online with the same design as in TLAD. However, the bumpers, grille, headlight housings and rear-view mirrors are finished in black rather than in a silver color, and the hazard lights work in conjunction with the engine. The interior remains largely identical, but the central mirror is removed and all the rear seats are functional, allowing up to 11 occupants including the driver. In the enhanced version, the vehicle uses analog truck dials.

The vehicle appears in a blue primary color and lacks the rust and worn paintwork from TLAD, while retaining the same wheel design. It also uses Bolingbroke Penitentiary State Prison emblems and BPSP stencils on both sides and both ends, as well as a white checkered pattern on both sides of the roof. Gruppe 6 logos can also be seen on the sides, just near the front part of the front fenders.

The Prison Bus performs much better than the Bus due to its shorter wheelbase and lighter construction. It has moderately good handling for a vehicle of its size and class, but given it is an armored vehicle, it suffers from poor acceleration, although it can still achieve considerably good top speeds. Its heavy weight also allows for the ability to push aside smaller vehicles with ease. The Prison Bus is also durable in head-on collisions, and its engine is rarely set aflame when severely damaged. The high suspension and the all-wheel-drive layout makes the vehicle a good performer off-road and on rough, uneven terrain.

The Prison Bus is powered by a twin-cam straight-4 cylinder with a turbocharger, coupled to a 5-speed gearbox in a front engine, all wheel configuration, with equal torque distribution. It shares the high-revving engine sound with the Bus.

The performance of the Prison Bus is rather basic for a vehicle of this type: being a slow and heavy vehicle, but it makes up for the weight and the armor. The Prison Bus still has a high top speed for a bus, in its class, but has poor braking and average handling, apart that it can tip over to the side at high speeds, making fast cornering considerably dangerous. The RWD layout makes this vehicle less powerful off-road than in TLAD and will struggle at climbing up pronounced slopes, but is still able to sort out uneven terrain thanks to the suspension.

The Prison Bus is powered by the same modeled twin-cam straight 4 with a turbocharger featured in TLAD. This time, however, it is coupled to a 4-speed gearbox in a front engine, rear wheel drive layout. The engine sound is roughly similar to that of the other buses in the game.

Decals of the TLAD rendition of the Prison Bus.

The Prison Bus in one of the Heists Update promotional screenshots. 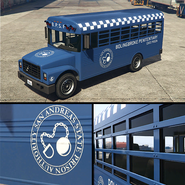 The Prison Bus on the updated Rockstar Games Social Club.

The Prison Bus in the cinematic preview on Rockstar Games Social Club. 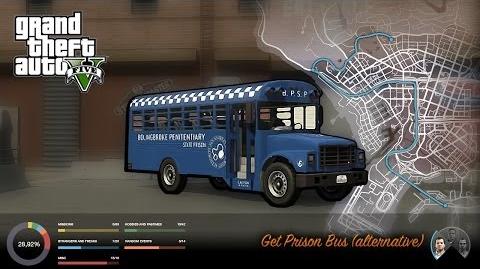 GTA V - How to get the Prison Bus
Easiest way to obtain and store a Police Prison Bus in GTA V.

The Prison is notably rare and it is one of the unique vehicles.

The Lost of Damned