The Fleeca Job
“Steal an aircraft from the Vagos contraband smugglers at McKenzie Airfield. To be used to get Rashkovsky out of the country after the prison break.”
— Heist Setup description.

Plane is the first heist setup for the Prison Break in Grand Theft Auto Online as part of the Heists Update.

Agent 14 tells the crew that the Vagos have a Velum 5-Seater at McKenzie Field that they are using to transport drugs across the border. This makes it perfect so that their target, Maxim Rashkovsky, can leave the country when he's been broken out of prison.

This setup splits the crew into two teams: the Ground Team consisting of three players and the Pilot. The host is the Pilot by default, but as usual, can reassign roles as needed.

The Ground Team is responsible for clearing the airfield of Vagos members, who are located around the hangar's front, guarding the plane. The crew has to make their way through the airfield and letting the Pilot taking the vehicle.

After taking most of the first group, Agent 14 informs about the Vagos' channels "going crazy" and warns the crew of reinforcements coming to the airfield, consisting of Emperors and Cavalcades arriving from several access points of the airfield. The group must then eliminate the enemy reinforcement while keeping the airfield clear for the Pilot.

Once all Vagos members are eliminated, Agent 14 informs the crew that the area is clear. In a few weeks, the story will be leaked to a reporter and the Vagos will be blamed for the prison break. Once the Pilot is airborne, they are instructed to leave the airfield and largely left to otherwise do as they please as they wait for the Pilot to deliver the plane.

When stationary in a safe location use the Interaction Menu to spectate other players while on a Heist.

The Pilot is responsible for taking the Velum 5-Seater and flying it from the airfield. The Pilot requires coordination from the Ground Team, as one is unable to detect all enemies on the Radar. However, it does not forbid one from helping the Ground Team if necessary.

Once the Pilot is airborne and leaves the area, Agent 14 instructs them to deliver the plane to a hangar (Devin Weston Jet Charter) at Los Santos International Airport. Once the Pilot arrives at the reticle inside the hangar where two agents are waiting, the mission is completed.

Afterward, the crew will spawn outside the main terminal. 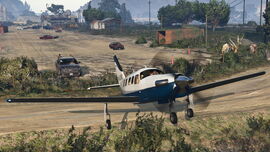 The Pilot taking off in the Velum. 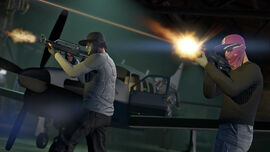 The team clearing out the airfield for the Velum.