"When cheap imports flooded the market through the 80s and 90s, the US car industry did what any proud free marketeer would do: grab a government subsidy, snort an exe bonus and crap out a four-door sedan every bit as drab and forgettable as its Japanese counterparts. It's not often you find a canvas this black, to go wild - it's not like 2 tons of street mods are going to ruin the performance. Eligible to customization at Benny's Original Motor Works."
―Benny's Original Motor Works description.

The Albany Primo Custom is a four-door lowrider featured in Grand Theft Auto Online, added as part of the GTA Online: Lowriders Update.

The Primo Custom retains the same bodywork and design as the Primo, but now features cambered wheels, a lower ride height and a much larger variety of bodywork modifications. Its underside is now fitted with a paintable frame and has a visible driveshaft, a different exhaust setup (dual pipes instead of a single Y-splitted pipe) and visible hydraulic bars connected to the suspension.

A unique theme of the Primo Custom is engravements, with the suspension having a unique engraved design on both ends, it is also featured on the door handles and stock rims. The same pattern can also be applied to the front bumper, grille, exhaust, engine block and air filters.

The Primo Custom is identical in all forms to the normal Primo, making the upgrade more suitable for those who want to own a lowrider sedan rather than for those seeking to maximize their sedan performance-wise. As a result of its low ride height, the Primo Custom can collide with curbs at high speeds.

Like the normal Primo, the vehicle is powered by a V8 engine, as suggested by the cover. However, it sports 4 double-barrel carburetors on it, which is a common sight among many single-cam V8 engines. Its engine sound has also been changed with a more aggressive tone to it. Similar to the normal Primo, the "Low Level Spoiler" modification adds the "Supercharged V8" badging on the rear end. 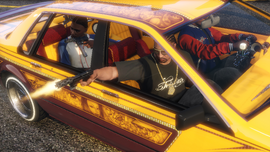 A Primo Custom seen in a pre-release screenshot for the GTA Online: Lowriders Update. 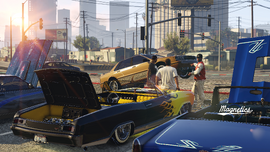 A Primo Custom seen jumping using its Hydraulics in the background.

The Primo Custom on the Rockstar Games Social Club.

Retrieved from "https://gta.fandom.com/wiki/Primo_Custom?oldid=1185618"
Community content is available under CC-BY-SA unless otherwise noted.