“Nothing said 'buy American' when imports were sweeping the States in the 70s and 80s like the Albany Primo. A midsize luxury car that was built to last.”
— Southern San Andreas Super Autos description.

In Grand Theft Auto: San Andreas, the Primo resembles a 1986-1990 Toyota Camry and 1989-1994 Nissan Maxima from the front, while the more upscale overall appearance is similar to the Audi 100 C4.

The Primo is one of the better sedans available in the game, although its design is less remarkable and thus appears more generic in traffic. It has square lights, a small grille, medium-sized bumpers and black inner pillars. Primos are set to spawn in single colors.

In Grand Theft Auto IV, the Albany Primo bears similarities to the 1992-1997 Cadillac Seville, with the grille, front headlights and tail lights of the 1987-1993 Cadillac Allante.

Designed as a standard middle-of-the-road sedan, the Primo borrows most of the design traits from its previous iteration, but features a slightly larger front end and is generally rounded on the edges. The front bumper features a license plate and front-facing fog lamps, while the grille features the corresponding Albany badges.

The sides make use of flared wheel arches and side yellow marker lights, as well as black inner pillars and black square rear-view mirrors on the greenhouse area. Its wheelbase appears to be lower, giving it a somewhat sportier appearance.

The rear of the car is somewhat identical to its previous rendition, but features a red light strip surrounding the turn and reverse lights from both sides and passing above the license plate, while the trunk features a small lip and the corresponding badges, also displaying the car's name. The rear bumper features two lower mouldings for the exhausts.

Primos may appear in a single-tone color or with two-tone colors, where the secondary color is applier to the lower portions and the flat sections of the sides and rear end. An additional tertiary color is present for the strips running through the bumpers and the doors, the grille, the trim on the fenders and around the windows, the roof and the rims. It uses a set of wheels consisting of a flat disk with triangle/star shaped patterns on it.

The Primo is equipped with a GPS system with a male voice, but only if the player leaves the "selected cars" (default) option in the audio menu.

Color distribution is the same as before, but the interior stitching matches with the primary color and the details were permanently set to chrome, no longer receiving a tertiary color. The Primo's wheel design were carried over from GTA IV, and is also shared with the Seminole.

The Primo is one of the most dependable vehicles in the game, possessing good handling as a result of its lighter weight, fair acceleration and a decent top speed. For that, it is an ideal choice for doing drive-by's against enemy gangs. While relatively acceptable under normal driving conditions, the Primo's axle width may make the car less stable in bumpy conditions.

In Grand Theft Auto IV, its engine gives it an immense top speed, on par with full-on sports cars. The Primo's underpinning is its body roll and small, weak brakes. The Primo's acceleration and handling are also poor and un-sporty and it suffers from a problem similar to the Emperor in which the rear swings frenziedly on sharp turns - but even worse, the car feels heavily planted on the ground, therefore, if the turning is done smoothly, the Primo will do a very wide turn, the only possible workarounds are to start drifting yards before where the desired turn is or to slow down. This car is thus very unfavorable for driving at high speeds, leading this vehicle to be better suited towards missions where a getaway vehicle is not required, friend "hangouts" and city driving. Due to its sturdy build, the Primo is able to take a few direct frontal hits without stalling or setting alight.

The Primo is stated to be powered by a supercharged V8. The engine cover itself is relatively long, sharing the same initial design as the marked-out V8 engine covers found on various other sedans and SUVs, however no indication of cylinder count is marked on the cover. Under the cover are 4 exhaust manifolds on the left hand side of the model, but a complete lack of any manifolds on the opposing side. The engine is coupled to a 5-speed gearbox in a front engine, rear wheel drive configuration. The engine sound is the same as the Vincent's. Unlike its real life counterpart, it is rear-wheel drive, rather than front-wheel drive.

The performance of the Primo seems to be the same as in GTA IV, with the exception that it is mostly outclassed by other similar cars. However, it retains its resistance to crashes and an unusually competitive stance in its class, especially for a car of its price range.

Again, the Primo is powered by what appears to be a V8 engine. With the "Low Level Spoiler" modification installed, the "Supercharged V8" badging may be present on the rear end.

A customized Primo at night. Note the glowing brake calipers. 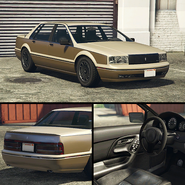 The Primo on the updated Rockstar Games Social Club.

The Primo in the cinematic preview on Rockstar Games Social Club.

The Supercharged V8 variant of the Primo in GTA IV (Rear quarter view).

A standard Primo with a black body and golden trim scheme.