Standard White - 100%
“The Karin Previon goes like a bullet. Well, like a reloaded cartridge that you forgot in the back of the garage for twenty years which might blow your hand off, but hey! How much you overload it in the workshop is up to you. Just remember, eating the steering wheel and going up in smoke is half the fun.”
— Southern San Andreas Super Autos description.

The Previon assumes a relatively small design, having a medium-sized front bumper with a narrow intake, a small grille on the centre and rectangular headlamps with small indicators beside the grille. The sides have slightly flared arches with protruding details passing through the doors, as well as small rear-quarter windows and the fuel cap on the rear left section. The rear has a small boot with a lip spoiler, rectangular tail lamps and a medium-sized bumper with similar shape to the front one. The car is seen in a variety of single colours.

The Previon returns in Grand Theft Auto Online manufactured by Karin, this time based on the third generation Toyota Soarer (Z30)/Lexus SC (Z30). The vehicle also retains some link to its 3D Universe basis by also taking design queues from the fourth generation Honda Prelude in the bonnet and grille/nose, and the fifth generation Prelude in the rear quarters and bumper. The tail lights are directly borrowed from the Nissan Silvia S13. The front bumper of the Previon might have been inspired by the 6th gen Toyota Celica GT-Four, albeit with the side vents in the place of the indicators.

The vehicle assumes a more rounded and sportier design in comparison to its previous rendition, albeit keeping the two-door layout. The front of the car is mostly predominated by a rectangular grille/intake spanning about two thirds of the car's width, while the sections beside it have smaller dual intakes. On the upper area, the car bears the Karin logo on the centre and wide headlamps that are very similar to those of the Penumbra FF, retaining the same shapes and details, as well as same distribution (inner main lamps, middle high-beam lamps and outer indicators). The bonnet has two smooth lines starting from the inner shapes of the headlamps and curving towards the lower edges of the windscreen, while the compartment opens to reveal the engine bay with a strut brace.

The sides are denoted by the character lines going towards the rear end of the car, as well as the additional body lines above the skirting area and the small door handles. On the glasshouse area, the car has black trim around the windows, black separations for the rear-quarter windows and the rounded mirror shells near the A-pillars.

The rear of the car consist of a small boot lid with the Karin logo on the rear centre, as well as sectioned tail lamps with black borders, where the upper halves have outer indicators, middle main lamps and inner reverse lamps, while the lower halves have brake lamps. The rear bumper is relatively bulky in shape and has a dedicated section on the centre for the number plate, as well as two rounded mouldings for the exhaust tubes.

The interior and dial set are shared with the Calico GTF, the Euros and the RT3000, being white/paintable variations of the ones seen in cars like the Coquette, the Habanero and the Serrano. The Karin logo can be seen on the horn cap.

The primary colour of the car is applied on the bodywork, while the secondary one is applied on the door handles, brake calipers and stitches on the steering wheel. A trim colour is also available for part of the interior, as well as a dial colour. The car has unique five-spoke rims with five bolt details around the centre and fitted with low-profile tyres, which are notably wider than custom wheels.

Acceleration and speed are decent, in line with the vehicle's size, engine, and front-wheel drive powertrain. The engine moves the small chassis competently, but modestly. Handling and braking are above average, mostly due to the lack of performance. The small frame is rather weak, and tends to absorb damage poorly.

The vehicle is powered by a V8 engine fitted with a pod filter on the manifold, stated to be supercharged and able to be modified with optional accessories to give it a bulkier appearance, as well as having fully-animated timing belt and pulleys. Said engine is coupled to a 5-speed gearbox, powering the rear wheels and sharing the same sound with cars like the XA-21, the Jugular and the Vectre. 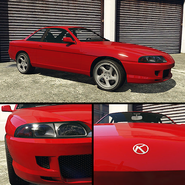 The Previon in the cinematic preview on Rockstar Games Social Club.