For the electronics company introduced in Grand Theft Auto Online, see Premier.
“In production from 2004 to 2010, the Declasse Premier never gained traction in the US market but was insanely popular in Canada. Why? Nobody knows... It's a national psyche that defies analysis.”
— Southern San Andreas Super Autos description.

In Grand Theft Auto: San Andreas, it is the civilian version of the Taxi and the Police Car, it also appears to be a "cousin" of the bulkier Elegant, while the more compact HD Universe rendition seems to be the older brother of the Asea.

The Premier strongly resembles a 1993-1994 Chevrolet Caprice, meaning it was likely a brand new model (the game is set in 1992, model years are generally one year ahead). The grille is lined with chrome and is split down the middle vertically, similar to the 1982-1984 or 1987-1988 Pontiac 6000. The tail lights, which are rectangular in shape as opposed to the Caprice's rounder tail lights, might have some influence from 1992-1994 Ford Crown Victoria's. Its very boxy greenhouse looks closer to the Australian Holden VK Commodore, but this may be to conserve graphics. In fact, graphics are likely to blame for the car's resemblance to the facelifted Caprice; a beta Police Car had a much closer resemblance to the 1991 model.[1]

In Grand Theft Auto IV, The Lost and Damned and The Ballad of Gay Tony, the Declasse-manufactured Premier is redesigned as a more modernized compact design, which is more suited for urban city streets. It is resembling a cross between the Chevrolet Cobalt and Daewoo Lacetti, with some details that resembles a 2005-2011 T250 Chevrolet Aveo sedan (obviously for its four-door design but also for its tail light design). The front of the car appears similar to Chevrolet Cobalt sedan and the 2001-2006 Toyota Corolla E120. With its enlarged grille located in the bumper region, the car bears an eerie resemblance to the 9th generation Chevrolet Impala. The tail lights appear similar to the 2005-2011 Chevrolet Aveo tail lights, and are reminiscent of the tail lights of the 2006-2009 Ford Fusion and the 2007-2009 Ford Taurus. Its front and rear are also similar to the 2001-2007 Citroen C5, As well as having some resemblance of the third generation Nissan Altima, mainly with the chrome tail lights and muffled engine sound, as was the case with the 2002-2006 Altima 3.5 SE.

Compared to the 3D Universe iteration, the car has a sleeker and more compact design, where the front bumper sports a lower grille that spans about half the car's width and a license plate in the center, followed by circular fog lamps beside the grille and inset formations with thin intakes on the outer edges of the bumper, whose upper lines coincide with the upper border of the grille. Above the bumper region, there is a rectangular upper grille with a slightly narrower width compared to the lower grille, a silver finish and five horizontal separations, while the outer sections have silver rounded headlight housings with sharp inner edges and black trim. Each one of the housings contains large circular headlights in the center, smaller ones on the inner edges and tiny amber indicators on the outer edges. The hood has distinctive lines that appear to start from around the headlight housings and almost reach the lower corners of the windshield, while the Declasse logo can be seen just above the upper grille.

The sides of the car make use of flared wheel arches and thin ridges separating the side skirts from the rest of the car, while additional ridges are seen passing through the doors and body lines that run parallel to the waist lines, starting from the upper edges of the headlight housings and leading towards the upper edges of the tail lights. The greenhouse area bears plastic/polymer trim around the windows and wide gaps for the front and rear doors, while the painted mirror shells are seen near the A-pillars, and an aerial sits on the roof. Silver horizontal door handles are fitted as standard.

The rear of the car consists of the trunk lid with a protruding lip on the upper border, a dedicated section for the license plate, and additional badges on the lower corners that diplay the car's name and manufacturer. Next to the trunk are rounded housings with similar features to the frontal ones, where each housing contains large circular red lights on the outer/central sections, small reverse lights on the inner sides, and wide amber indicator bars on the bottom edges. Below the upper region, there is the large rear bumper with a slightly impressed formation in the middle, while the bottom area features a vented section that is about two-thirds of the car's width and has two mouldings for the exhaust pipes.

The Premier is only available in a variety of single-tone colors and uses a set of six-spoke rims with a circular center, using medium-profile tires with standard tread pattern.

The Premier in Grand Theft Auto V and Grand Theft Auto Online retains the same design and features as in GTA IV, though with slight tweaks on the model; the upper grille has three gaps instead of five, and the ridges passing through the doors are no longer present. It also has less visible lines on the bodywork, giving it a smoothened appearance. In the enhanced version, it uses the same interior and dial set as the Stanier and the Taxi.

The description on Southern San Andreas Super Autos mentions that it was popular in Canada but not in the United States, likely as the compact car category makes up a bigger proportion of Canadian auto sales, and also as the Daewoo Lacetti was sold under a mainstream brand in Canada (as the Chevrolet Optra), as opposed to an obscure brand in the US (as the Suzuki Reno/Forenza)[2]. It is also mentioned that the Premier stopped production in 2010, after six years on the market.

Again, the Premier is only available in a variety of single-tone colors, and uses the same wheel design as before.

Its acceleration, speed, and handling are all quite impressive, while the sturdiness and bulk of the chassis render the Premier capable of withstanding heavy damage, making this front-engine, rear-wheel-drive beast simply one of the best passenger vehicles in the game. The strong engine, responsive handling, and sturdy frame also make the Premier an ideal car for performing the PIT maneuver and for ramming other vehicles, hence its use as a police car. The only downside is its below average grip on road.

The Premier in GTA IV has a 4.0L V8 engine according to the badges, coupled to a 5-speed gearbox in a rear-wheel drive layout. The engine itself is responsive, propelling the vehicle off the line quickly, and giving it an outstanding top speed for an everyday sedan, but its gear ratio kills acceleration, since the gears are apparently very far apart, accurately representing the stereotypical of an automatic transmission in most compact cars. Handling is rather good for a car in the compact 4 door class, keeping the Premier stable in most turns, though some oversteer can be felt. The suspension is rather soft however, giving way to body roll. Braking is adequate, though not as good as other, larger sedans. Crash deformation is below average, with the Premier stalling after only a few collisions. Overall, the Premier's performance traits are similar to that of its mid-sized counterpart, the Merit.

The vehicle shares its sound with the Uranus, the Esperanto and Roman's Taxi.

The Premier seems to have had a power upgrade as the car has a lot more get up and go than the previous rendition. Handling has also been improved thanks to the more realistic FWD like its real-life counterpart. It is responsive and quick, and handles very well on tight corners, making the Premier a rather fun and exciting car to drive while being on par with more expensive, larger sedans in the game. Braking is good, and ABS is standard on all models.

The Premier's engine sounds to be a mid to high revving V6, and the beefy engine and 5-speed transmission work together in propelling the vehicle off the line quickly, resulting in a long burnout from the front wheels and yielding an impressive 0-60 time as well as a fantastic top speed for its class. For being a smaller compact sedan, the engine can be overpowering at some times, considering the Premier's lighter total weight and economy themed instead of performance themed drive train layout, but nevertheless the Premier is a good getaway vehicle in terms of performance.

Damage deformation, however, is quite poor, as crashing headlong in the front even at moderate speeds can significantly degrade its overall performance, resulting it in becoming sluggish. Further collisions mean lower speeds which can make evading the police a challenge.

The engine sound seems more high-revving and smoother compared to the GTA IV iteration, being also shared with the Asterope and the Romero Hearse.

Various versions of the Premier. From left to right: A normal Premier, a Police Car and a Taxi.

A Premier in GTA V. 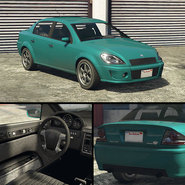 The Premier on the updated Rockstar Games Social Club.

The Premier in the cinematic preview on GTA V Rockstar Games Social Club.

The Premier in the cinematic preview on GTA Online Rockstar Games Social Club.

The Premier is rare vehicle, seldom spawning throughout the entire state.