In all of its appearances, the Predator serves as the main patrol vessel used by the law enforcement. It is usually seen roaming in water areas or pursuing the player while having a wanted level.

The Predator in the 3D Universe is depicted as a police-issued speed boat with a small cabin and an open rear, loosely based on a Cougar Enforcer patrol boat (possibly a combination of the 35 and the 40 Gen4 models). It has two built-in .50 caliber machine guns on both sides of the hull.

In Grand Theft Auto III and Grand Theft Auto: Liberty City Stories, the boat is relatively simple, featuring a simplistic hull, a rotating radar antenna and two large aerials on the back of the cabin roof. It is only seen in a blue primary color on the lower side with a white secondary color on the upper side, with "POLICE" markings on the sides. In the Xbox and mobile versions of GTA III, the Predator features a bow rail, a small ladder on the back, and buoys attached to the sides.

In Grand Theft Auto: San Andreas, the boat assumes the same features as the Vice City rendition, but adds a rear surfing-style rack with mounted police light beacons. These lights are permanently activated, though no siren sound is heard or activated.

In Grand Theft Auto IV, the Predator strongly resembles a Type PP-601 patrol boat, seen in the hull length, cabin area and vented details on the back, as well as the radar equipment and frame positioning.

The vehicle retains the general layout from previous iterations, but appears to take the appearance of a small patrol watercraft, with an enlarged and wider body. The front of the boat features two cleats and hand rails. An LCPD emblem is found on the trunk cabin, and on either side underneath the cabin side windows. LCPD text is found on the roof and POLICE markings along the platform coaming. The platform coaming also features hand rails. The washboard also features two aerials. Various naval accessories and a lamp are mounted onto the roof, and fenders are hung along the sides. Unlike previous renditions, the vehicle lacks any mounted weaponry.

The boat assigns a white primary color for most of the body, while a blue secondary color is applied on the lower hull and the gunwales.

The Predator returns with an identical design to that of the GTA IV rendition, but slight changes were made. The "POLICE" markings are again found on the side, and "Dial 911" markings are seen along the top. The LSPD emblem is found on the trunk cabin and more "POLICE" text is seen on the radar. The lamp on the roof can be toggled on and off, like any watercraft.

Color distribution is the same as in GTA IV, but the secondary color is set to black. 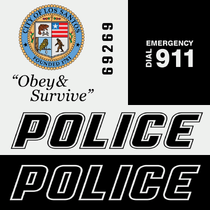 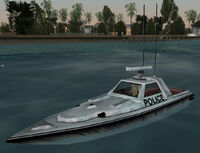 As a police-issued boat, the Predator is generally fast and responsive, as well as having an average acceleration. Its resistance, however, is below average due to the thin armor and the poor capabilities for large combat. This is compensated by its machine guns, as the firepower and rate of fire makes these weapons a large threat, able to take out other boats easily. Other than the overheating or reloading mechanism, the machine guns seems to have no disadvantages.

Predators shoot the same rounds as NPC-controlled Police Mavericks, except in Grand Theft Auto: Vice City Stories, where it uses Little Willie rounds, thus giving the player the ability to destroy any other boat directly in front of them; however, the guns are also revealed to seize briefly after prolonged firing, implying it is reloading ammunition.

The Police Predator is rather heavy compared to other speedboats such as the Jetmax or the Squalo, but is still a good choice thanks to its acceleration, top speed and handling. While the machine guns are absent on the HD Universe version, the Police Predator seems to be less sensitive to collisions and gunfire, given the general design and purpose.

The Police Predator has impressive performance thanks to its powerful engines. The boat has mild steering which often "oversteers" (a bad radius issue with its props). The boat has reasonable acceleration and is not slowed down dramatically by waves or general current, however its stability while stationary in the water is often loose and therefore the boat has a tendency to move around unintentionally.

According to the files, the Police Predator is equipped with a radar in the manner as a mounted weapon, though does not serve any purpose and is likely made for the spin animation.

The "Police Boat", an earlier iteration of the Predator in GTA III prior to the game's release.

Predator in the mobile version of GTA III.

An early design of the Predator in GTA Vice City.

LCPD Predator alongside a civilian Ghost, seen in The Definitive Edition of GTA III.

GTA IV, with LCPD officers armed with Carbine Rifles on the platform, aiming for the player.

The dashboard of the Police Predator in GTA V.

The Police Predator on the Rockstar Games Social Club.

The Police Predator on the updated Rockstar Games Social Club.

The Predator only appears parked empty in specific locations. It is not used by the local police and does not spawn during wanted levels.

The Predator can be seen patrolling Vice City as well as parked in a specific location. Local police will also use the boat and give chase to the player when they have a wanted level of 2 stars or more.

The Predator can rarely be seen patrolling San Andreas, albeit with only the driver. Local police will use the boat and give chase to the player when they have a wanted level of 2 stars or more.

The Predator only appears parked empty in specific locations. It is not used by the local police and does not spawn during wanted levels.

The Predator commonly appears patrolling Vice City and also spawns when the player has a wanted level of 2 stars or more.

The Predator only spawns when the player has a wanted level of 3 stars or more. They are pretty difficult to obtain, as there are two riflemen with Carbine Rifles and can kill the player easily if they are too close. However, Predator captains are scripted to give chase to the player only if they are swimming.

The Police Predator regularly patrols the coast areas of Los Santos and Blaine County, particularly Fort Zancudo and Los Santos International Airport. Will also spawn if the player has a wanted level of 2 stars or more.