Bang Bang and Kibbutz Number One

“I've fucked up. Good and proper. I worked the Algonquin nightlife for twenty years! I beat everyone! Mayors, rivals, drugs, everyone and this time I've fucked up!”
— Gay Tony.

Practice Swing is a mission in The Ballad of Gay Tony. It is given by Gay Tony to Luis Lopez.

In Tony's pad, Tony had sold the same property to two individual buyers, forcing him to find a way to straighten things up. Luis tells Tony that he would take care of things and the two resolve. Then, Tony tells you to head to a golfing club where they meet Rocco Pelosi, one of the men which Tony owes money to. After some racial insults are exchanged between Luis and Rocco, Pelosi give Luis a job, to help him coerce some information out of a Union Official working for the Messina Family.

Complete the mission in 4:00.
Take less than 50% damage
Kill 11 enemies via headshots
Have 70% accuracy or better
Each golf ball hit the union official with no mistakes.

Once at the driving range, wait for Rocco to call for Luis to start swinging. The Union Official is attached to the front of the Caddy.

First of all, go into 'Fine Aim' mode and position the target exactly over the victim, not the vehicle itself. Now, start your swing, and when it starts to come down, stop the bar on the narrow target line. This should put the ball on target.

Repeat this twice more, with Rocco moving further away each time, before Messina Family enforcers crash the party in Cavalcades FXT and try to stop any information being leaked to the Ancelottis. Run with Tony down to ground level, or stay up top for the time being and take out the attacking mobsters. With them dealt with, get in the Caddy and follow Rocco in a chase through the park, the Messina pursuers will eventually crash into trees, and it's smooth driving from there.

Out of danger, Luis, Tony and Rocco meet up in a parking lot. If Luis kills the Union Official, Rocco will complain that he won't be able to get anymore information out of him. If the Messinas kill the official., he'll sound slightly aggravated. However, if the official survived, he'll tell Tony and Luis that he's taking him back home to "do the messy work" and get more information. 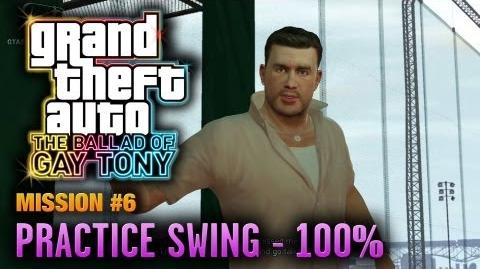