"For those about to work"
"Drill them All"

"For those about to work."
―Power Metal slogan.

Vintage Power Metal woodworking workshop tools can be found inside the Los Santos Naval Port in GTA V. Inside the main dock building there is a band saw, planer, circular saw, table saw and drill press next to two work tables with blueprints and a nail gun on each. In a side room on the east of the building, all but the circular saw are repeated along with a modern tool chest. The band saw can also be found outside at the Paleto Forest Sawmill.

As well as making products, they also appear as a sponsor for racing activities. They appear as sponsors on the liveries of Jester (Racecar) and Massacro (Racecar). In the enhanced version of GTA Online, they appear on posters around "Branded" Vehicle Warehouses.

There appears to be two versions of their logo; an "M" with the spark icon cutting through the center, and another design without the spacing within the "M".

Power Metal appears to be based on the Craftsman tool brand owned by Sears. It could also have some influence from Würth in its logo, which is another tools company.

The Hotring Sabre has a Power Metal livery is inspired by a real NASCAR stock car sponsored by GM Goodwrench.

A nailgun in-game in GTA V. 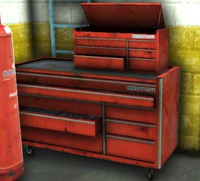 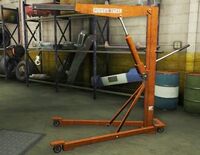 Tool case.
Add a photo to this gallery

A cordless drill used in a heist in GTA Online.

Power Metal livery for the Fagaloa.

A Issi Sport with a Power Metal livery.
Add a photo to this gallery

Retrieved from "https://gta.fandom.com/wiki/Power_Metal?oldid=1179398"
Community content is available under CC-BY-SA unless otherwise noted.