Standard White - 100%
“A large-sized truck for your Nightclub Warehouse. And yes, it comes with heavy armor and a wide range of weaponization options. Showbusiness can be a ruthless game.”
— Career Builder description.
“After a certain point, you have to ask: is this still a weaponized vehicle? Or is it just an arms depot with four wheels and an engine? Well take it from us: once you've taken your pick of heavy armor, front-mounted chain guns, dual missile launchers, an artillery barrage, a passenger-controlled grenade launcher, proximity mines and a roof covered in barbed wire, you know you've crossed that line.
Please note: this vehicle can be stored and modified exclusively in your nightclub warehouse.
”
— Warstock Cache & Carry description.

The MTL Pounder Custom is a custom variant of the Pounder, added to Grand Theft Auto Online as part of the After Hours update.

The vehicle is a modifiable variant of the Pounder, sharing the same profile and layout. The vehicle remains largely identical to its regular equivalent, but adds two side guard rails to prevent other vehicles from getting stuck between the wheels, as well as side steps and handles on each side of the cargo box, intended for six additional players to hang onto the sides, similar to vehicles such as the Brickade and the RCV. The vehicle can also be modified with an array of visual modifications, being armor plates, liveries and respray colors.

The vehicle sports a worn effect by default, and the box's sides do not feature liveries. It also has access to a primary color for the cabin and the box, and uses the same industrial wheels as the regular Pounder.

The Pounder Custom is, as expected from a large truck, relatively slow on the throttle and has poor brakes, but makes up for its sheer size and ability to ram vehicles out of the way. While not as powerful as the Brickade against other road users, the truck can be upgraded with a front wedge similar to that on the Armored Boxville, which slightly increases its ability to part traffic. In addition, it cannot navigate through low tunnels, making deliveries extremely difficult. Worse, the Pounder Custom struggles to pick up speed on steep hills and roads, as it has very poor climbing power, even with full engine upgrades.

Although it is believed to use the same V8 engine from the regular version, it is not possible to see the engine model, as the hood is fixed and cannot be opened. It shares the engine sound from the regular Pounder, being somewhat similar to a diesel engine that revs moderately high (yet still lower than other trucks, such as the Benson and Police Riot), and provides a significantly smooth engine sound, yet the roar produced from the engine can still be heard unlike the aforementioned vehicles, the Benson and Police Riot.

Installing the "Barbed Wire" modification prevents other players from climbing into the box, and also gives the vehicle a slight traction increase, in the same way as a spoiler.

Despite having three different levels of armor upgrades, none of them make the truck any more durable in free roam, as the truck will still explode with only a single explosive near the body, unless the player is in a Sell Goods mission, in which it gains increased resistance and immunity to missile lock-ons. However, the cabin also has bullet-resistant windows similar to vehicles like the Schafter V12 (Armored) and the Baller LE (Armored), giving the occupants slight protection against most firearms before being shattered.

It should be noted that while the Heavy Armor Plating upgrade adds plates that constrict the openings in the windows, they do not offer additional protection at all. In addition, adding any Armor Plating will take away the ability for occupants to use throwable weapons.

The Pounder Custom has access to an array of weapons, separated into primary (driver-operated) and secondary (passenger-operated):

The Pounder Custom can only be modified at the Vehicle Workshop inside a Nightclub.

* Denotes items that can only be unlocked for purchase via Research in the Bunker property.
** Vehicle is limited to Tire Smokes. Bulletproof Tires installed as standard.

When purchased, the Pounder Custom comes painted in the following colors by default:

The Pounder Custom on the updated Rockstar Games Social Club.

The Pounder Custom in the cinematic preview on Rockstar Games Social Club. 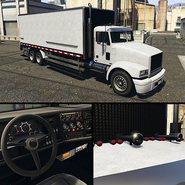 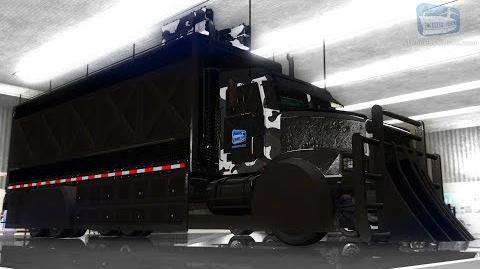