"No longer just mail"
"Your package is safe in our hands"

"Global package courier that has created a billion dollar company out of losing people's possessions."
— LCN.com.

Post OP is a shipping company in Grand Theft Auto IV and Grand Theft Auto V based on the United Parcel Service (UPS). The player can buy stocks from them on the Lcn-exchange.com website in GTA V.

In GTA IV, Benson fleet trucks operated by the company can be found around the city. A warehouse for the company is found in Port Tudor in Alderney, with an office located in The Triangle, Algonquin.

In GTA V, the company operates Mule fleet trucks. The Heists Update for Grand Theft Auto Online added the Boxville as another vehicle used by the company. The company has an office in Pillbox Hill, its own warehouse at the Terminal, a depository at Elysian Island and a depot on Paleto Boulevard in Paleto Bay.

The company appears as one of the main postal services in the HD Universe, alongside GoPostal, Liberty State Delivery and Alpha Mail. Mailmen for the company can be seen in GTA IV, but they are rare to find. They are, however, more common in GTA V.

Office on Iron Street-Frankfort Avenue, Liberty City.
Add a photo to this gallery 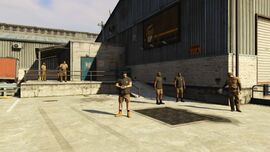 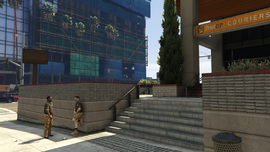 Post OP delivery men outside the couriers office.
Add a photo to this gallery

Retrieved from "https://gta.fandom.com/wiki/Post_OP?oldid=1312346"
Community content is available under CC-BY-SA unless otherwise noted.