GTA Wiki
Register
Don't have an account?
Sign In
Advertisement
in: Islands, Locations, Locations in GTA III,
and 4 more
English

While Portland is known as a primarily industrial portion of the city, focused on varied industries and shipping, a sizable residential and commercial population does reside in the island, as the majority of the island is occupied by several non-industrial districts. Much of the island's industrial population is concentrated towards Trenton at the south of the island, and is within a short driving distance to Portland Harbor and Atlantic Quays, which serves as seaports to the island and the city. Non-industrial properties tend to reside towards the north and west sides of the island. Portland also operates an elevated train service with three stations (Rothwell Station in Hepburn Heights, Kurowski Station in Chinatown, and Baillie Station in Saint Mark's).

The Saint Mark's district, located on a steep terrain north from Portland Harbor, is home to an Italian-American population, and is currently controlled by at least one Mafia family: the Leones. The Forelli Family are also known to have influence in the area, especially in Marco's Bistro, a restaurant in the district. Chinatown, located northwest from the industrial districts, houses a Chinese-American population, with Chinese-owned commercial, industrial and residential property evident in the district. As for gang control in the district, Chinatown was once controlled by the Leones, until the Triads took over the area, with the help of the Sicilian Mafia, most especially Massimo Torini. As the Triads and Leone Family are enemies to each other, skirmishes between members from the Triad and the Leone Family occur frequently in areas bordering Chinatown and Saint Mark's.

Other districts of interest include the Red Light District, just west of Saint Mark's, which serves as a prime location for strip clubs and other adult businesses. For a time, it was controlled by the Sindacco Family. However, they were kicked out of the city, and eventually, the Leones took over. Hepburn Heights, located north to the Red Light District, is home to several apartment projects. It was once a turf of the Leone Family; later on, however, the Hispanic street gang the Diablos would control the district. Harwood, located on the northern end of the island, is mostly underdeveloped, with only a few buildings (including the Head Radio broadcast station), a junkyard, and the Porter Tunnel's Portland entrance/exit. Harwood is also infamous for the deaths of 11 men at the hands of Tommy Vercetti during the year 1971, thus earning him the nickname "The Harwood Butcher".

The remaining districts of Portland are sparsely inhabited: Callahan Point (also known as Waterfront Promenade) is located under and around the foot of the Callahan Bridge, which links Portland and Staunton Island; Portland Beach is an empty cliff-side beach located east of Saint's Mark; while consists of a tract of land and a stretch of road between Portland Harbor and Chinatown. Old platforms and train cars of a railway line are also found in eastern Harwood, as well as a railroad tunnel running under the Saint Mark's district, which directly links Harwood with Portland Harbor. Portland Rock, a small island housing a lighthouse, may also be seen east of Portland Beach.

The Portland Beach area was created to look like the beachy areas in and around New York, such as Coney Island and Fire Island, which are near the shores of Staten Island and Long Island, respectively. Chinatown, obviously enough, takes its inspiration from the Manhattan neighborhood of the same name. The Saint Mark's district takes it name from Little Italy in Manhattan. Trenton takes its inspiration from New Jersey's capital city and the Red Light District resembles Manhattan's 42nd Street of the 1980s.

The Callahan Bridge is a major bridge linking Portland to Staunton Island, and is one of two ways to cross the body of water dividing the two aforementioned boroughs. During the events of GTA Liberty City Stories, the bridge is under construction, but the player is still able to traverse the bridge, thanks to a ramp. After the events of GTA Liberty City Stories, the bridge was most likely completed, as the information pickup on the Portland end says that it would be completed May 1998. It would still be used by 2000, the setting of GTA Advance. However, by 2001, a bomb destroyed a major part of the Callahan Bridge. It would take some time for it to be repaired and for it to be fully functional again.

The Porter Tunnel is the citywide tunnel system in Liberty City, with a segment linking Portland to Staunton Island. During the events of GTA III, the construction of the whole tunnel has been delayed several times, however, it would soon open segment-by-segment, starting with the section linking Portland to Staunton (after Last Requests). The tunnel could also lead to Shoreside Vale, another borough of the city, with exits in Wichita Gardens and Francis International Airport. However, like the segment between Portland and Staunton Island, its opening would be delayed. The Portland entrance of the tunnel can be found at the northwestern edge of the district, in Harwood. Note, however, that there is completely no Porter Tunnel in GTA Advance, due to programming restrictions.

However, during the events of GTA Liberty City Stories, no segment of the Porter Tunnel existed linking Portland and Staunton Island. In replace of the Porter Tunnel entrance in Harwood during GTA III, there would be a port for ferries, providing rides from Harwood to Rockford in Staunton Island. Mayor Miles O'Donovan promised that the ferries would last, however, by 2000, it would ultimately shut down, as no ferries can be seen during GTA Advance.

Also, a subway line also connects the whole city. A subway stop can be found on the border of the Red Light District and Chinatown. The player may ride the subway to other designated stops in Staunton Island and Shoreside Vale. Again, this feature is unavailable in GTA Advance due to programming restrictions.

Portland also includes some areas that appears to be based on Little Italy, Manhattan (Saint Mark's) and the Chinatown district from either Manhattan or Baltimore.

Portland is made up of the following neighborhoods:

The following people are currently residing or have resided in Portland:

The Ferry terminal in Harwood.

The Portland entrance/exit of the Porter Tunnel. 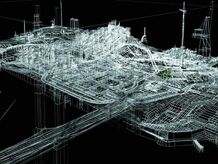 An early wireframe of Portland.

Portland from above on the official Grand Theft Auto III website.