"Porter Tunnel, a major project to link the city together, but it is promissed by City Hall that building will be complete some time in 2001."
— GTA III Website.

The Porter Tunnel is primarily a dual carriageway (4 lanes, 2 each direction) underground and underwater road tunnel (the Staunton Island exit is a single carriageway and has only one lane for each direction), which connects all boroughs in Liberty City: Portland via Harwood, Staunton Island via Rockford, and Shoreside Vale via Francis International Airport and Wichita Gardens.

The tunnel is actually a system of three separate tunnels, two of which branch out from one long-running tunnel from Harwood to Wichita Gardens, while the branch tunnels lead to Rockford and Francis International. The Francis International portal consists of two separate openings on either side of a surface road, each for one traffic direction.

Much of the tunnel runs underwater.

In 1998 (the time setting of GTA Liberty City Stories), the tunnel is revealed to be only partially completed, as only the Shoreside Vale ends of the tunnel are operational, while the Shoreside Vale-Staunton stretch is still under construction; digging towards Portland had not even begun (an issue further suggesting the late completion date for October 2001). At the time, the tunnel's future Portland exit is occupied by the ferry terminal, which is temporarily shut down following city-wide protests against the construction of both Callahan Bridge and the tunnel, which will render the ferries obsolete. The ferry returns to service after compromises and assurance by a newly elected mayor to retain the ferry service, but was ultimately shut down, its Portland terminal cleared away for the Porter exit.

The tunnel is also exploited by Donald Love and Toni Cipriani as a route to reach an old subway line, where the player must plant explosives to destroy the Little Italy district of Fort Staunton.

In 2001 (the time setting of GTA III), the tunnel is initially inaccessible, citing that tunnel construction was still incomplete and had been delayed several times. At the time of the tunnel's delays, the tunnel's chief engineer and project director is Winston Cole, while the project's financier is FBC Finance Group. The tunnel was originally scheduled for completion in April 2001, but was delayed to late-October 2001, coinciding with GTA III's timeline. The projects has been plagued with problems, such as leakage, as well as corruption, leading to the project winding up over-budgeted and behind schedule.

Porter Tunnel entrance is incomplete (Harwood, 2000)
Add a photo to this gallery 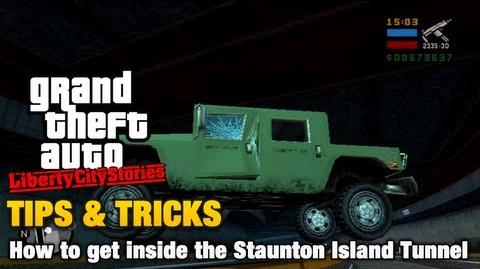 Retrieved from "https://gta.fandom.com/wiki/Porter_Tunnel?oldid=1175907"
Community content is available under CC-BY-SA unless otherwise noted.