Like various cars bearing the "Porka" name, the Porka 910 is clearly a factory-built motorsport car based on a Porsche, specifically, a Porsche 910; this is yet another anachronism in the game, as the Porsche 910 did not debut until 1966, five years after GTA London 1961's setting. Despite its appearance as a race car, the car does appear in traffic. Being a racing car, the Porka 910 may also come with a single or double-colour racing stripes, as well as occasional but unidentified markings on the car's doors.

The Porka 910's performance is considerably good, with excellent top speed, acceleration, braking and handling. The car also has a 2% more vehicle health than usual. 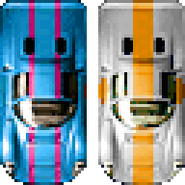 Two possible variants of the Porka 910 with racing stripes.
Add a photo to this gallery

Retrieved from "https://gta.fandom.com/wiki/Porka_910?oldid=951137"
Community content is available under CC-BY-SA unless otherwise noted.