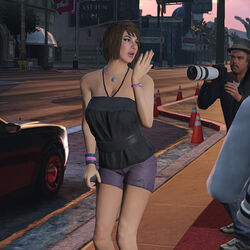 Poppy Mitchell Gets Popped! is an article appearing in the 2013 issue of the Stars Talk Weekly magazine. It covers the recent scandals of celebrity Poppy Mitchell having sex.

Our old friend Sloppy Poppy is at it again. Despite overwhelming high-definition, close-up evidence to the contrary, Poppy Mitchell is still claiming that she is all about keeping it real pluto-tonic. As in far away and hard to define. Appearing on The Weazel News Morning Show yesterday, the young actress accused everyone, from the liberal media to rival All-American romcom starlet Lacey Jonas to the "wackos,” of waging a smear campaign against her.

“There’s like these apps now that can totally change what you’re doing in photos and videos. No seriously. One minute you’re doing some quad stretches with your trainer, the next it’s being sold as a sex tape. And yes I like to go out and party, and sometimes I fall over and quote hiphop, but that’s just exhaustion from being a role model or a contact buzz from the people I’m with. I don’t care what the Internet says about me. I’m all about staying true to myself and my tween fanbase. Purity is the most important thing in my life right now. Totally. This stuff is cut I think. Stop rolling you idiot...”

Oh please. The only thing pure in Poppy Mitchell’s life right now is the 8 ball she goes through on a nightly basis. At this point, is there anybody in Vinewood who hasn't had a go at her Promise Ring? We’ll stay on this story until it gets interesting or she has a mental breakdown.

Retrieved from "https://gta.fandom.com/wiki/Poppy_Mitchell_Gets_Popped!?oldid=1183335"
Community content is available under CC-BY-SA unless otherwise noted.