Rachel Gittler
“I will fucking destroy you, and everyone who knows you!”

— Poppy, in The Sex Tape

Poppy is a beloved American actress in the romantic comedy genre, Luis Lopez even calls her "America's favorite daughter". However, Poppy also has a wild nightclub life that she tries to keep private (possibly a parody of Lindsay Lohan). She tells Luis that her manager insists on her cleaning up her act, as she was allegedly caught sexting and it has slightly damaged her career.

In Club Management, a paparazzi crowd surrounds the Maisonette 9 in order to get photo coverage of her latest trip to the club. She had apparently discretely finished group sex in the VIP room (this was written about on Celebinator, and their blog picture reveals she changed clothes) when she wished to exit the club without paparazzi bothering her. Luis drives a fire engine to the doors and uses the fire hose to scare off the photographers, who scatter once sprayed. Poppy then gets a lift in the fire truck (or any other vehicle of the player's choosing) to the hotel where she was staying, the unnamed hotel on Luddite East. Like many girls in the nightlife scene, Poppy had sex with Luis in the VIP room after hours.

During her appearance in GTA V, Poppy is a lot more unstable and anger-prone than in her TBoGT appearance, probably due to years of Vinewood and paparazzi pressure wearing down on her. She appeared in the article Poppy Mitchell Gets Popped! for Stars Talk Weekly magazine, where she blamed liberals and Lacey Jonas for her recent mischief.

She then takes to Bleeter to defend herself, claiming the tape has been doctored from being an innocent 'yoga class' to a sordid sex video.

A Poppy Mitchell background is among those selectable in Michael De Santa and Franklin Clinton's smart phones.

Poppy returns in Grand Theft Auto Online as part of the GTA Online: After Hours update. Having been released from custody, she is one of the celebrities the GTA Online Protagonist can be called upon to deliver to their club to maintain their popularity. She will then be found inside the nightclub for a period of time, dancing in the VIP lounge area.

Poppy Mitchell at Maisonette 9 in The Ballad of Gay Tony.

Poppy Mitchell and Luis Lopez in a Fire Truck during the Club Management mission. 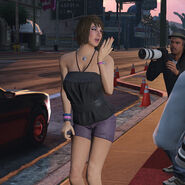 Poppy on Vinewood Boulevard in GTAV.

Poppy Mitchell in a Redwood Cigarettes ad in GTA V.

Poppy Mitchell as the face of Caca.

Poppy crashing her Rapid GT in the Alta Construction Site.

Poppy Mitchell caught by the police.

In a player's nightclub online.