GTA Wiki
Register
Don't have an account?
Sign In
Advertisement
in: Sports, Gambling, Friend Activities in GTA IV,
and 4 more 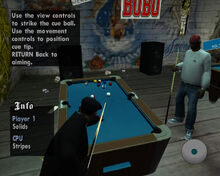 Two players can play pool and either player wins. The main goal is to get all the colored balls within the designated colors into the holes in the table and then get the 8-Ball to win. Green pool tables were first seen in Grand Theft Auto: Vice City, however, it could not be played by the player. It was not until GTA San Andreas that pool could be played by the player as a mini-game. In GTA San Andreas the pool table's design is based on a 1980's Valley 7-foot coin-operated pool table, while in GTA IV, its appearance is likely based on a Diamond 7-foot table.

In GTA San Andreas, CJ can challenge any person at a bar who is holding a pool cue to a game of pool. A wager can be placed, with maximum wager being $1000. CJ then begins to play pool with him.

If CJ wins the game, he wins whatever he'd wagered at the beginning of the game. If he loses or quits, he loses the money he wagered. In any instance, CJ gets a pool cue, which replaces whatever melee weapon he'd had.

It is possible to retrieve the wagered money by killing the challenger.

The player can compete against another player using a second controller, but no money can be wagered.

CJ breaks. Whoever sinks a ball first gets that pattern, stripes or solids, and the other player gets the opposite.

The turn is lost on the following occasions:

If a player scratches, the other player can put the cue ball anywhere on the table before shooting.

The game is won under the following conditions:

The game is lost under the following conditions:

About to hit the cue ball 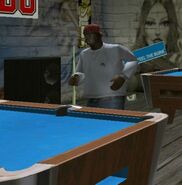 In the beta version of GTA San Andreas the pool tables was originally going to be painted green, not blue, and there was going to be a pool table in Madd Dogg's mansion.

Pool can be played against friends, or against a random competitor when not being accompanied by a friend. The player may not wager money.

As in GTA San Andreas, the pool cue is obtainable as a weapon in The Lost and Damned after completing a round of pool.

Winning a game of pool will grant the player the achievement "Pool Shark". Michelle is the easiest player to beat while Little Jacob and Packie are both good players and therefore harder to beat for the achievment.

The rules are the same as in GTA San Andreas. However, there are a few new items:

There are two different types of pool table in GTA IV:

A game of pool with Little Jacob at the Homebrew Café in GTA IV. 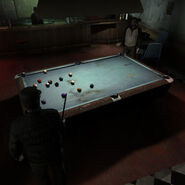 The pool in Homebrew Café. 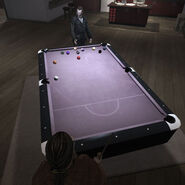 The pool in Playboy X's Penthouse. 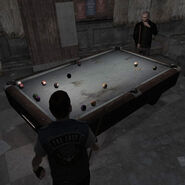 The pool in Lost MC Clubhouse.

There is a glitch when playing the game on the Xbox 360 and PS3. If a shot is missed, press LB/L1 before the opponent's turn. Then press A/X to get back into the game (pressing LB or L1 again will forfeit the game). The opponent will hit either the players or their own ball and will foul for hitting the wrong color ball, even if it's theirs and the fould shot rule will be applied allowing the player to take their next turn.