Smoke On The Water

The Pony is a medium-sized civilian and commercial van featured in both the 3D Universe and HD Universe. It is manufactured by Brute in the HD Universe.

For GTA III and GTA Liberty City Stories, the Pony features a modern appearance with a high roof (compared to the Rumpo's lower roof) and resembles a slightly generic 1992-96 Ford Econoline.

The GTA Vice City, GTA San Andreas and GTA Vice City Stories renditions, however are directed in an older form with a conventionally low roof which makes the van aesthetically similar to Ford vans from the late 1980's and 1990's such as the Ford Econoline, with influences from the 1979 Dodge Tradesman.

In all its incarnations, the Pony is capable of carrying four passengers (two in the front, two in the back), and can be found driving around industrial areas.

Regular Ponies in San Andreas may occasionally appear with stereo systems in their cargo holds. One such Pony is seen during the mission "Life's a Beach", where it is used by a DJ for a beach party (see #Variants for more details).

In Grand Theft Auto IV, the Pony is manufactured by Brute and is bigger than its last appearance. The front resembles a 1997–2002 GMC Savana and GMC Vandura, while the sides and rear resemble a 1986–1993 Dodge Ram Van. It has tall, narrow taillights, more so than the Ram Van, and its side-mirrors seem to closely resemble modern vans, particularly the 1996–present Chevy Express/GMC Savana. The rear also resembles that of the 1995–2005 GMC Safari. Its interior features unique metal bars that separate the cab from the cargo hold. The van may spawn with or without a roof rack as the only available accessory. It can also spawn with boxes loaded in the back.

The Pony comes with various different company names including Sum Yung Gai Chinese Restaurant, U-Benders Plumbing Services, Pizza This and Mr. Wong's Laundrette. There is not a Pony without a company name in GTA IV.

The Pony returns to Grand Theft Auto V and Grand Theft Auto Online with the same design, however its liveries have been replaced with 3 different liveries; Sunset Bleach, GoPostal and Sprunk Extreme. The van spawns with several random colours, however some of the colours only appear paired with a specific livery. Color set 3 (dark grey) spawns only with the GoPostal livery[1], and set 6 (black) only spawns with the Sprunk Extreme livery.[2]

In GTA III and GTA Liberty City Stories, despite being a van the Pony is able to accelerate finely and reach top speed very quickly making it one of the best vans in the games. Although the steering isn't as favourable it can easily be overcomed by using the handbrake on sharp turns and corners.

The Pony's performance was harshly redesigned in GTA Vice City, GTA Vice City Stories. While it retained its decent top speed, its acceleration was now poor. Unless the van is being driven on a lengthy road with no interruption -which is almost never the case- it will never have enough time on full-throttle to reach top speed. The van's heavy weight prevents it from being able to effectively steer without using the handbrake, but even that isn't straightforward because using the handbrake tends to cause the van to come to a complete stop before continuing to accelerate unless it's being driven on top speed, which is very unlikely due to aforementioned reasons. In GTA San Andreas the steering seems to be more responsive but the van still suffers from the poor acceleration.

The Pony's performance is somewhat distant compared to the Speedo and the Burrito, as its top speed and acceleration are lower, given the rather large size and the RWD layout. Its handling is decent and its brakes are average, but tends to be problematic when attempting to steer. Resistance to crashes is something that the Pony will have over the Speedo and the Burrito, as the rather heavy weight allows it to push vehicles easily at top speeds and seems to withstand more head-on collisions than the two aforementioned vans. In other words, instead of the Burrito's focus on speed and the Speedo's focus on handling, the Pony is heavily focused on resistance.

The Pony is powered by a transversely-laid, double-cam inline-4, coupled to a 5-speed gearbox in a FR layout. There is a badge on the rear that states it is a supercharged engine.

The Pony's performance remains challenging, as the van has extremely poor acceleration, which is on par with the Utility Truck's. The Pony has a higher top speed than other vans, however its sheer weight and size prove a struggle for the van to reach it, and the low-revving diesel-sounding engine clearly is not powerful enough. The vehicle has acceptable brakes, and a mediocre cornering, which can be said better than other, larger vans, but still not as nimble as the Speedo or Rumpo. Strangely enough, the Pony can drift quite decently for a van with below-average performance.

On a technical standpoint, the Pony is not different from its GTA IV iteration, having the same inline-4 coupled to a 5-speed gearbox in a FR layout, again stated to be a supercharged engine. However, it is slightly faster due to the increased speed, according to the files.

Smoke On The Water.

The Pony on the updated Rockstar Games Social Club.

The Pony in the cinematic preview on GTA V Rockstar Games Social Club.

The Pony in the cinematic preview on GTA Online Rockstar Games Social Club.

The Smoke On The Water Pony on Rockstar Games Social Club.

The Smoke On The Water Pony on the updated Rockstar Games Social Club.

The Smoke On The Water Pony in the cinematic preview on GTA V Rockstar Games Social Club.

The Smoke On The Water Pony in the cinematic preview on GTA Online Rockstar Games Social Club.

A Pony with a unique black body colors can be found during "Loose Ends". It can be also found driving on the streets or parked somewhere in the city if the player inputs "Black Cars" cheat into the game. 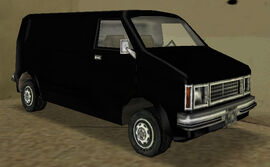 During the Grand Theft Auto: San Andreas mission "Life's a Beach", there is a also unique teal Pony with a large stereo system and off-road wheels (presumably to allow it to traverse the sandy beach); it is a one-of-a-kind vehicle as Ponies cannot be modified at TransFender.

The Pony as depicted during "Life's a Beach", GTA San Andreas. Note the off-road tires. 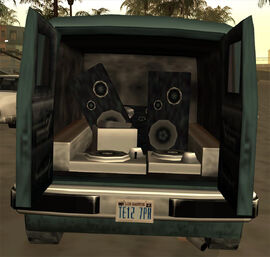 The sound system on the Pony in "Life's a Beach". Other Ponys in the game may feature the same content in their cargo hold.

Smoke On The Water 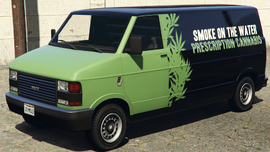