The Police Transporter's design is based on a passenger version of the second generation Burrito, issued for law-enforcement purposes.

The vehicle is fitted with several protective parts, including a bullbar, barred windows and bulletproof windshield. The vehicle is permanently fitted with a rotating halogen incandescent emergency light bar, similar to the Interceptor's permanent LED sirens, and is available in a white-black scheme with the LSPD badge on the front doors and driver-side rear door, along with other police markings. The Police Transporter also has Dark Smoke window tint applied as default.[2]

As its name implies, the vehicle is intended for transporting police officers to where it is required. However, the vehicle is only seen in roadblocks and rarely pursues the player.

Entering the Police Transporter gives the player a SMG.

While the Police Transporter's performance appears to be roughly similar to that of the Burrito, it gains raised suspensions, making it easy to control over uneven terrains and rarely loses balance when taking corners. It also has slightly better acceleration. The vehicle is more protective for the occupants thanks to its window platings and bulletproof windshield, allowing to survive higher wanted levels, especially Police SUVs and roadblocks, since these are usually deadly for the player if stops near them. However, one must be aware that the side platings leaves small gaps, which are not bulletproof and will shatter like normal windows. Drive-By Shooting on a Police Transporter will not be easy, as the bullets will be blocked by the side door platings, but not by the windshield or the rear doors. Also, the player is unable to select thrown weapons or even the Fist, as the covered windows blocks the spots.

The Transporter appears to be powered by a transversely laid, single overhead camshaft Inline-4, coupled to a 5-speed gearbox in a front engine, rear wheel drive layout. The sound emitted when at idle and accelerating sounds like a typical low-revving diesel engine, roughly similar to other vans. It also shares the same engine model as the Youga, albeit with more detail. 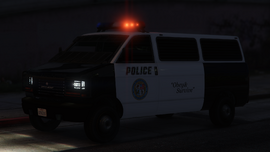 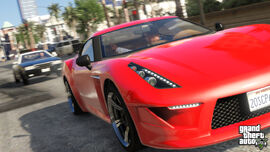 Franklin escaping from the police in a Carbonizzare, with a Police Transporter in the background.

The Police Transporter on the Rockstar Games Social Club.

Retrieved from "https://gta.fandom.com/wiki/Police_Transporter?oldid=1173224"
Community content is available under CC-BY-SA unless otherwise noted.