Police stations are locations in the Grand Theft Auto series where the local law enforcement and their vehicles are located. Some police stations in the series also have helipads and even double as towing impounds. The main reason for a police department in the game is to act as a spawn location when the player gets busted. In the 3D Universe, it was restricted to one island or city (San Andreas). In the HD Universe, there are multiple stations per island or city (in Grand Theft Auto V, however there is only one per small town).

The Liberty City Police Department is headquartered in Torrington. The building is unique for having a helipad on its roof. The interiors of any of these stations are not accessible to the player.

The Pike Creek LCPD station. (Inaccessible)
Add a photo to this gallery

The Vice City Police Department is headquartered in Washington Beach. It is the only accessible police station in Vice City. The main entrance allows visitors but within the headquarters are restricted to only police. If the player attempts to go past the main entrance, they will gain a two-star wanted level. However, the player can wear a cop uniform to access the whole interior without being wanted.

The Downtown Police Station. (Inaccessible)
Add a photo to this gallery

In GTA San Andreas, there is a total of seven police stations under the command of the San Andreas Police Department. Three are situated in major cities, while the remaining four are located in rural areas of the State of San Andreas.

The Los Santos Police Headquarters, the Dillimore station, and the Las Venturas Police Headquarters are the only stations accessible to the player. Access to the station is unrestricted, but if the player draws a firearm, they immediately gain a two-star wanted level. Of an interesting note, the Dillimore station is exactly the same as the LSPD headquarters, but with different officers.

The El Quebrados Police Station. (Inaccessible, however CJ will go inside for sex if he is dating Barbara Schternvart)

The Las Venturas Police Headquarters. (Accessible)
Add a photo to this gallery

The Liberty City Police Department is large and organized, possessing 16 police stations throughout Liberty City. All stations are inaccessible. 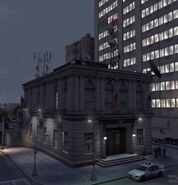 The Leftwood LCPD station. (Inaccessible)
Add a photo to this gallery

"The LSPD don't mess around. There are no three strikes in Los Santos; one strike and you're on your way to either jail or the morgue. If you are arrested, you'll have your ammunition and body armor confiscated, be taken to the nearest police station, and will have to post bail on release."
— GTA V Manual

Police stations of the LSPD.

Mission Row Police Station and Impound Garage. Lobby is accessible, other areas such as the staircase and helipad are restricted and will gain the player a wanted level at the point of entry.

Paleto Bay Sheriff's Office.
Add a photo to this gallery

Retrieved from "https://gta.fandom.com/wiki/Police_Stations?oldid=1109152"
Community content is available under CC-BY-SA unless otherwise noted.