GTA Wiki
Register
Don't have an account?
Sign In
Advertisement
in: Articles with section stubs, Vehicles, Vehicles in GTA V,
and 5 more
English

The Police Roadcruiser is the police version of the Esperanto from Grand Theft Auto IV, used by the North Yankton State Patrol. Its styling inspiration appears to be a pastiche of common late-70s/early-80s American car styling. The bumpers, sides and bustle-back styling (a majority of the chassis) is based on the Seventh Generation (1982-1987) Lincoln Continental. The grille and headlights are similar to a 1982/1983 Chevrolet Malibu (the shorter width of the grille makes it look like a 1984 - 85 Chevrolet Celebrity); and the taillights seem based on a '80-'81 Pontiac Bonneville/'85-'86 Pontiac Parisienne, the reverse lights could also suggest some other luxury cars. The combined look seems to emulate an early Cadillac Seville as it is commonly mistaken for one.

The car features an all-white color with gold and blue stripes down the side, "STATE PATROL" on the fenders and the police emblem emblazoned on the front doors. "Trooper of the year 1951" markings can be seen on the rear portions. The Police Roadcruiser lacks any sort of badging.

The vehicle sports a unique light bar bearing four emergency lights, spot lights mounted on the A-pillars and two antenna on the roof. It is heavily covered in snow in the upper surfaces, bumpers and windows, and appears to have a worn texturing on its underside and portions of the engine bay. The vehicle also features chains on its tires for better grip on snowy and icy streets. 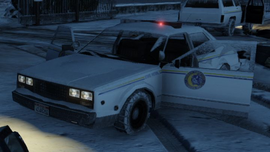 A Police Roadcruiser during the Prologue. 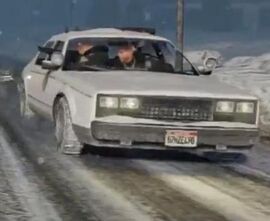