The Police Rancher is based on the 1973-1991 Chevrolet Suburban but with a boxier design. It could also be based on a second generation Chevy K5 Blazer or 1984-1996 Jeep Wagoneer. It also shares some styling (front and rear fascias) with the Dodge RamCharger, albeit being considerably larger.

The Police Rancher is a police variant of the Rancher XL, a derivative of the Rancher from Grand Theft Auto IV. It features a North Yankton State Patrol livery with two stripes (gold and blue) with the legend "Trooper of the year 1951" and a light bar.

The Police Rancher only spawns with snow on its roof, hood and bumpers, due to it being programmed to appear only in the Prologue, like the Police Roadcruiser. The vehicle also features chains on its tires, which aid the vehicle in driving in snowy, slippery conditions; The chains, however, are merely for aesthetic purposes, and do not seem to change the vehicle's handling in any way. There is a handle on the rear trunk door which isn't present on the regular variant, but is present on the snow-covered variant.

Although normally unobtainable in-game, testing the Police Rancher out through the use of savegame editing or trainers reveals that the Police Rancher's performance is a sort of 'hybrid' between the normal Rancher XL and the game's numerous police vehicles. Despite being an off-road vehicle, the Police Rancher is surprisingly nimble. 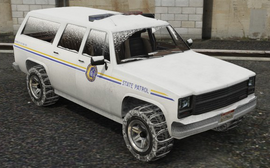 The Police Rancher in the orignal version. (rear quarter view)

Retrieved from "https://gta.fandom.com/wiki/Police_Rancher?oldid=1176173"
Community content is available under CC-BY-SA unless otherwise noted.