The Police Patrol's front is modeled after the eighth generation Chevrolet Impala Police Edition while the back resembles a BMW 318i E36. Like the Cruiser, the Patrol's livery is clearly based on those of the New York Police Department's vehicles.

The Police Patrol is the police version of the Merit, featuring the same equipment as on its Vapid counterpart, the Police Cruiser. Like the latter, it serves as one of the LCPD's primary patrol vehicles, and its usage may vary during the game.

The vehicle also features a slick-top counterpart, like the Police Cruiser. While it is unobtainable without the use of a trainer to access its relevant file, the model removes the roof-mounted light-bar, but still allowing its sirens. The lighting effect around the vehicle is also removed. The slick-top is influenced by the real-life NYPD Chevrolet Impala slick-tops used in New York. Both the standard and the slick-top versions, as well as the Merit-based Taxi, feature radio aerials. These aerials are more visible on the slicktop variant due to the lack of emergency lights on the roof (while on the Taxi, these can be seen with the roof sign removed by crashing onto an obstacle).

In Grand Theft Auto: Chinatown Wars, the Patrol bears LAPD-style markings, rather than the LCPD-style, making the car more immediately recognizable as a police car via the DS interface; the car also incorporates GTA IV's police computer for use in vigilante side missions, and being the defacto police car in the game, it is the fastest sedan-based law-enforcement vehicle in the game, with responsive controls and good durability.

In cutscenes, the car in its GTA IV form may be seen (alongside the Police Cruiser), but is depicted with omitted rear quarter glasses.

The PSP depiction of the Police Patrol in GTA CW looks more similar to its GTA IV counterpart. It differs in which "LCPD" is written on the roof the car, unlike the DS/iOS versions.

The Patrol, as the name implies, is generally used as a patrol vehicle rather than a pursuit vehicle, due to it being slower than the Police Cruiser, however the acceleration is about the same and both has the same mass (1,700 kg). The Police Patrol has good handling, with minimal spin and smooth turning, but has a tendency to roll over whilst turning at high speed.

Just like the Merit, it is powered by a modelled twin-cam inline-4 engine, positioned in a front-engine, rear wheel drive configuration.

In Grand Theft Auto: Chinatown Wars, the Police Patrol returns with a much better overall performance. Handling is now significantly greater, thanks to an improved suspension stability system, giving the car some great, nimble handling at average speeds. Its top speed can be reached in a matter of seconds, thanks to an impressive amount of acceleration and great traction. Braking is also acceptable, and from top speed, takes only as long as acceleration to come to a complete halt.

Handling at high speeds is still impressive, and the vehicle can easily be controlled in the hands of an expert, even despite the oversteer present at these speeds.

One major disadvantage is the car's durability; a few major frontal collisions is all it takes before the car begins to smoke, eventually leading to a loss in acceleration and a limit to its top speed.

On the whole, the performance of the Police Patrol in GTA CW is well above average, and it appears to be mislead by how the LCPD appear to use it, where they limit their ability for speed during pursuits. 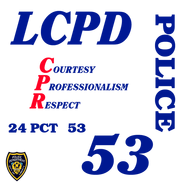 Pre-rendered in GTA Chinatown Wars, as depicted when the player is "Busted" in the DS version of the game. This does not happen in PSP and mobile versions.