• ­Only Fire One Shot Per Trigger Press
• ­Vehicle

The Police Maverick flown by the police possess many characteristics of the preceding Police Helicopter in Grand Theft Auto III. All versions of the vehicle are used by the city's police forces during Wanted Levels, from three stars and above.

In all of its appearances, the Police Maverick is a police adaptation of the civilian Maverick helicopter (excluding GTA V), usually seen operated by and deploying SWAT (3D Universe) or NOOSE (HD Universe) units.

In Grand Theft Auto: San Andreas, the Maverick is used by the SAPD and is operated in all of the three main cities. Apart of the different registration number is the tail boom and the black and white livery, the Police Maverick remains unchanged from its previous game.

The Police Maverick exists in Grand Theft Auto: Liberty City Stories, although it does not spawn normally as other renditions. It has the same details as the previous versions, except the blue and white livery and the LCPD markings.

In GTA Vice City, GTA San Andreas and GTA Liberty City Stories, the inside cabin is empty and there is no visible NPC flying the Police Maverick when it is flown by police. In GTA Vice City Stories, however, the VCPD Maverick has a pilot appearing as a normal Police Officer without any pilot gear, and upon the destruction of the chopper, the pilot will drop a Pistol and a Nightstick.

The Police Maverick is in turn based on a redone Maverick, and as a result, features rear sliding-doors and a four-blade main rotor. Its design is based on that of the Bell 206, identical to the Maverick. The livery is loosely based on those used on a previous generation of New York City Police helicopters, but with a reversed color scheme. The Police Maverick has a searchlight on the nose and, unlike its civilian or Helitours counterpart, features sidesteps on the rear bay doors.

Replacing the original "invisible" machine gun under the fuselage, there are now two Police Officers seated on both sides of the helicopter, programmed to shoot the player with Carbine Rifles (or Advanced MGs in The Ballad of Gay Tony), with NOOSE agents replacing police officers in Mavericks at four stars (provided that the FIB does not respond). The ability to deploy units has been removed from the game and, unlike in the 3D Universe, it may be replaced by the Annihilator from higher wanted levels, from five stars and above.

The Police Maverick has the same design as the GTA IV rendition, except uncontrollable. It also has the same machine gun mounted as 3D Universe, unlike GTA IV.

The Police Maverick features rear slide-doors and a three-blade main rotor, as well as a high-intensity spotlight, capable of highlighting targets; a feature shared with the Buzzard. Unlike previous renditions, it features two mounted winches, used to deploy officers, like the Police Maverick in Grand Theft Auto: Vice City. As with GTA IV, NOOSE agents use Carbine Rifles.

The Police Maverick has a mounted camera, like the Frogger, Annihilator, Maverick, and Buzzard.

According to its functionality and the pilot during the mission Eye In The Sky, the mounted camera allows the user to identify individuals by reading RFID transmitters placed in 2012 San Andreas driver licenses. It is marked with the zoom bar, the direction, the height, and the LSPD name written in a corner. It can activate a microphone to hear distant conversations and is implemented with thermal vision (much like Sniper Rifles in missions). The limitations of the device include a signal lost when the objective is hiding behind a solid structure unless thermal vision is used. In Grand Theft Auto Online, the camera can be used by the co-pilot to tag players for the pilot to see. In the enhanced version of GTA Online, it is revealed in a specific Vehicle Cargo Steal Mission that the scanner can also scan license plates of vehicles.

The Police Maverick flyable by the player controls similarly to a normal Maverick, differing only by its ability to pitch steeper than a regular Maverick (especially in games prior to GTA IV), due to the slightly decreased mass (4,500kg vs 5,000kg of the normal Maverick). The Police Maverick has a slight better top speed and handling, given its usage as a police vehicle. While it does not have weapons or an average resistance, the Police Maverick is still a good choice for flying around the city.

The Police Maverick appears to have a similar performance to its civilian counterpart, being easy to control, useful for navigating through the city. Its single turboshaft engine provides good power output for its blades, allowing for controllable movements, at the cost of being rather slow compared to the powerplant of the Annihilator or the small size of the Buzzard. In other words, the Police Maverick performs averagely, just like the standard version.

Because of the rather exposed cockpit, the front occupants may get shot from enemies in tall places or armed with assault rifles, considering the lower windows may be a weak spot for them when flying above these.

The Police Maverick has mediocre performance compared to other helicopters. However, as a freely available helicopter, it can be used for quick extractions or escapes. The aircraft is fairly maneuverable and has a descent airspeed. However the Police Maverick's speed falls short of luxury helicopters such as the Swift or attack helicopters like the FH-1 Hunter. Its climbing rate remains average for a transport helicopter and has an average weight.

The helicopter is unarmored and only two shots from the Heavy Sniper will be enough to damage the engine, although it can fly for a little over two minutes before the engine completely fails. Just like every other unarmored helicopter, the Police Maverick will be destroyed in only one hit from a standard explosive. Against the Heavy Sniper Mk II equipped with explosive rounds, the helicopter will only take two to three hits. Because of its decent maneuverability, the Police Maverick is able to avoid standard homing missiles but, just like all helicopters without countermeasures, fails to avoid missiles with better tracking fired from the vehicles such as the: Deluxo, Oppressor Mk II, or Ruiner 2000. Due to the open cockpit, the front occupants are very exposed to gunfire. The tail of the helicopter can be shot to destroy it more quickly.

Illustration of the Police Maverick on the GTA San Andreas boxart.

Beta Police Maverick in a pre-release screenshot of GTA San Andreas, showing a beta version of Are You Going to San Fierro?

A Police Maverick and a News Chopper chasing the player in a Dinghy in San Andreas.

Taking down a Police Maverick into the sea.

Another Beta Police Maverick from one of the early screenshots.

Another view of the Police Maverick in GTA IV. 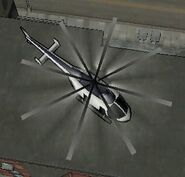 The player controlling a Police Maverick

The beta Police Maverick in the first trailer of GTA V.

A Police Maverick flying over Los Santos in a screenshot of GTA V.

A Police Maverick and a police cars chasing an Infernus. Note the red laser from the helicopter.

A Police Maverick chasing a lime-green Infernus in Vinewood Hills.

Trevor Philips aiming at a Police Maverick with an assault rifle. Note the red laser from the rifle.

Trevor stealing a Police Maverick in the mid-air as seen in his trailer.

A Police Maverick in GTA V.

Camera view of the Police Maverick during Eye in the Sky.

Police Maverick wreck after The Paleto Score. The destroyed apartment is in the background.

The Police Maverick on the updated Rockstar Games Social Club.

If the player manages to obtain it (not possible in normal means) in Grand Theft Auto: Vice City, the helicopter is useless and does not accelerate. It also misses some features such as leaning (however, it can lean left/right), going down and turning. This is due to the fact that, like the DeadDodo, the NPC Police Maverick follows a scripted path file [4] and it can be seen flying around the city when the player is piloting a flying vehicle. When the helicopter is in mid-air, it will fall through the ground immediately due to its "bullet/rocket collision only".

In Grand Theft Auto: Liberty City Stories however, the NPC Police Maverick performs exactly like a regular Police Maverick, due to the fact that there's no scripted path file for it like in GTA Vice City. However, it retains its abilities, and is thus extremely responsive and fast - it can accelerate to full speed and also quickly stop. It can also accelerate upwards very fast, past the game's height limit without any limitations, it also retains its black windows, obscuring its interior.

Slide door variant being flown on an iPad. 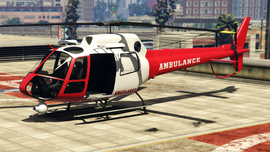 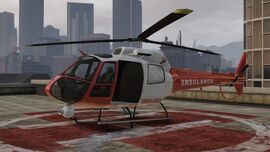 Side view of the Air Ambulance in Grand Theft Auto V. 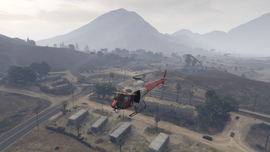 The Police Maverick does not spawn on top of police stations like in previous games, so the only way to obtain one is by using the Helicopter Sniping Trick using one of two methods:

NOTE: If the player manages to lure the helicopter over the pond in Middle Park, it will be easier to obtain, although the helicopter must have an open space and the water must be shallow. 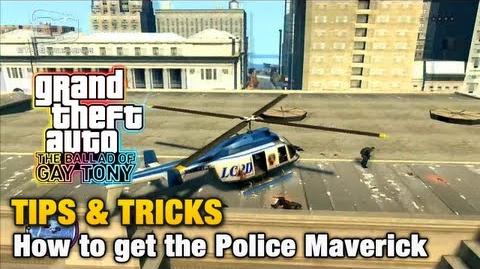