GTA Wiki
Register
Don't have an account?
Sign In
Advertisement
in: Pages with non-numeric formatnum arguments, Vehicles, Vehicles in GTA IV,
and 9 more

Police/Government Plate - 100%
This page refers to the Police Cruiser based on the Vapid Stanier. Two other police cars also share the in-game name of "Police Cruiser", the Police Buffalo and Interceptor.

The first generation Police Cruiser is heavily based on the 1992-1997 Ford Crown Victoria Police Interceptor, though some aspects such as the grille more closely resemble the 1998-2011 model. Much of the design is also inspired by the seventh generation Chevrolet Impala SS, particularly in the headlight design, grille structure and some of the side profile. The dashboard instrument cluster consists of a tachometer, speedometer, fuel gauge and temperature gauge.

It shares its livery design with that used on the Police Patrol (based on that of the NYPD with its decals almost identical to those of the New York Police Department's vehicle). The Police Cruiser's chassis is also shared with Vapid's NOOSE Cruiser and Taxi.

The Police Cruiser does not appear as an obtainable nor controllable car in Grand Theft Auto: Chinatown Wars (as the Police Patrol is the only police car in the game), but does occasionally surface as an aesthetic element of "busted" sequences, when a pre-rendered depiction of a modified Police Cruiser may be seen. The sequences only appears in the Nintendo DS version of the game, as in other versions, the busted cutscenes are different.

The vehicle also has a slick-top counterpart. While the version is only accessible with the use of mods or through the result of a spawning glitch, the model removes the external light-bar on the roof. This version lacks the lighting effects, yet still retains the siren in its usual form. The lack of its light bar makes it resemble real-life 1992 - 1997 NYPD Ford Crown Victoria slick-tops.

In Grand Theft Auto V and Grand Theft Auto Online, the Police Cruiser returns with a modernized and lighter appearance than the GTA IV rendition, based on a 1998-2011 Crown Victoria Police Interceptor. Although the second generation is only available for police use, the first version still remains in the game as a civilian car (namely the Stanier). However, its usage is rather decreased, as the Police Interceptor has replaced the car as the LSPD's main vehicle for missions and wanted levels.

The Police Cruiser boasts a white and black livery with LSPD markings, and is available with either a LED emergency light bar similar to what is seen on the Interceptor and a rotating halogen incandescent one. The skin is modeled on the LAPD's iconic livery (obviously based on the Los Angeles Police Department's vehicles, with the halogen lightbar topped cars bearing the same look).

The vehicle may spawn with different registration and aerial identification numbers, shared with the other LSPD vehicles.

The Police Cruiser's high-performance engine produces an impressive amount of torque off the line, and accelerates well. It has restricted amounts of RPM, however, the RPM is still rather high for the vehicle type, considering its weight. Also, the engine feels as if it runs out of steam before the transmission switches gear. It has a higher top speed than its Declasse-branded competitor, but will not get there faster than the latest Bravado offering.

The car's weakness lies in its poor suspension, as the car experiences incredible amounts of body roll and has a tendency to over steer off throttle. Stability is average at high speeds, but due to its very soft suspension the car does wallow and float about quite a bit. The car does appear to have some decent tires on it, however, which does help with improving the handling quality, if only just a bit.

Crash deformation is also average, and the suspension does not take very long to start meandering one way or the other. The engine is not fragile, but is certainly not the toughest to destroy in the game.

The GTA V and GTA Online Police Cruiser, now based on the 2nd-generation Stanier chassis, handles differently than its 1st-generation Stanier predecessor in GTA IV (the 1st-gen Stanier appears in GTA V as a civilian car). Its suspension has been heavily stiffened, making rollovers less likely on flat terrain compared to the previous generation vehicle, at the cost of some turning ability. It also seems to have slightly better acceleration than the old vehicle, but it is still nowhere near the capabilities of the new Police Interceptor (which also goes by the in-game name "Police Cruiser").

However, the Stanier-based Police Cruiser does appear to be more strongly-built than the Police Interceptor, thanks to it's body-on-frame construction affording more durability than the Interceptor's unibody monocoque. The Interceptor will take only a relative few high-speed impacts before then engine starts to smoke, and also suffers from wheel locking after a decent quarter impact. The Stanier's engine is more durable, plus it takes a much harder crash to bend the front axle to the point that the wheel locks.

Overall, the Police Cruiser is a decent choice for a pursuit car as it is sturdy and stable enough to withstand multiple impacts while remaining controllable, and possesses good traction. 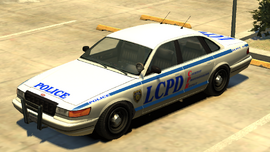 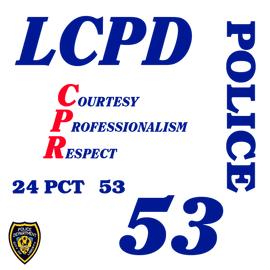 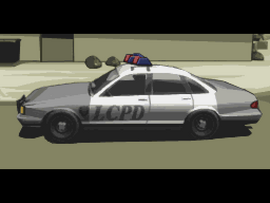 A Police Cruiser seen in a cutscene when the player is busted in GTA Chinatown Wars. (DS version only)

A Police Cruiser chasing a Packer in a pre-release screenshot of the mission Pack Man.

A Police Cruiser chasing an Infernus.

A Police Cruiser chasing a 9F.

A Police Cruiser chasing a Carbonizzare.

A Police Cruiser chasing an Adder.

Trevor escaping from the cops in a Sanchez (livery), with two Police Cruisers in the background.

A screenshot of Franklin, with the LSPD performing an arrest and a Police Cruiser in the background.

A Police Cruiser chasing a criminal in a Bati 801.

Interior of the car in the Xbox 360 and PlayStation 3 versions of GTA V.

Rear view of an LSPD Police Cruiser with a glitched LED light bar during the mission "The Good Husband".

The Police Cruiser on the updated Rockstar Games Social Club.

The Police Cruiser in the cinematic preview on Rockstar Games Social Club. 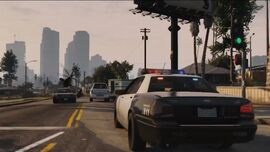 The Police Cruiser featured in the GTA Online trailer. 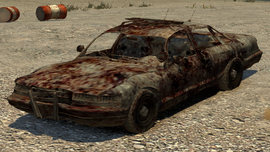 The "policew" in The Ballad of Gay Tony. (Rear quarter view)

In GTA IV, the majority of police vehicles are fitted with Police Computers, which can be accessed by pressing the L1 button (PlayStation 3), the LB button (Xbox 360), or the E key (PC), which lets Niko perform the vigilante side-mission, hence search for the most wanted criminals, monitor recent crimes in the area, search the police records and call for backup. Note that the latter feature is exclusive to GTA IV, and as such, mini-games cannot be played in The Ballad of Gay Tony or The Lost and Damned.

NOTE: Due to an insignificant amount of available research, the accuracy of the following locations is limited.