GTA Wiki
Register
Don't have an account?
Sign In
Advertisement
in: Pages with non-numeric formatnum arguments, Vehicles, Vehicles in The Ballad of Gay Tony,
and 9 more
English

View source
watch 02:56
Raise a Floppa - The Loop
Do you like this video?
Play Sound
For the police bikes in other games, see HPV-1000 or VCPD WinterGreen.

The Police Bike is seemingly based on the Harley-Davidson Road King FLHP. It is similar to an Electra Glide, but is closer in design to the Road King due to the lack of a fairing.

The Police Bike appears to be similar to the Wolfsbane, albeit with additional framework added for protection, smaller wheels, and the necessary policing and road-cruising equipment added. The front section features a bulky fender/mudguard with amber lights on either side and mounted to the fork legs, while the upper area consist of a circular headlight pod with a silver/chrome trim around, a tall windshield/visor with white "POLICE" markings on the front and a set of square turn signals and emergency lights on either side of the lower triple clamp. The handlebars are supported by dual frames and connected to the base of the windshield framing, in place of a traditional upper plate.

On the main body, the bike features a dual main frame on the front and additional frames on the sides, with the right one mounting a horn/loudhailer. The fuel tank is relatively small and features two caps on either side and a single speedometer on the center, while a black leather seat is seen extending towards the rear and a square oil tank below it. The engine bay features an oval-shaped air filter and exhaust pipes on the right side, with the latter coming from each cylinder block and splitting towards either side of the bike. An additional pipe also comes from the rear cylinder block and merges with the right exhaust pipe. The front area also has foot pads for the rider.

The rear section consist of a large fender/mudguard with additional framework for the equipment and a plate holder on the end with what looks like two blue circular lights beside it that function when the engine is on. The top frame mounts a single box, dual antenna, rectangular tail lights and tall beacons, while the side frames/racks mount two larger boxes and a set of rear-facing turn signals and emergency lights. The rear wheel is connected to a dual-sided swingarm, having dual suspension springs mounted to the side frames and the corresponding chain drive and sprocket on the left. Due to the rear equipment, the Police Bike only has capacity for the rider, despite still featuring rear foot pegs for a passenger, like most conventional bikes.

The vehicle is only seen in a white color with LCPD markings on the fenders, fuel tank and boxes, with the emblems seen on either end. It uses a set of rims similar to the Freeway and wrapped in medium-profile tires, with the rear wheel being slightly wider.

In multiplayer, LCPD officers are not seen riding the bike or pursuing the player in it (like the Police Stinger and Police Buffalo), unless they find it within their proximity, like most civilian vehicles.

In Grand Theft Auto V and Grand Theft Auto Online, the bike reappears with almost the exact look as in TBoGT, except for a few details. The bike no longer features tall beacon lights and dual antenna, but makes use of modern LED lights on either side of the front fender, above either side boxes and behind the top box. The tail light units were moved below the top frame's height and the blue lights beside the license plate work as additional emergency lights. The windshield/visor has an unknown window tint applied by default.[1]

In the enhanced version, the speedometer dial on the fuel tank uses the same "Chopper Bike" dial set also shared with motorcycles such as the Bagger and the Daemon, and the amber lights were given a more red color to match with other LSPD vehicles. It also gains an updated siren sound, being a yelp-siren and its noise is more electric.

Again, the bike is only available in white, but features LSPD markings on the fenders and top box, with the emblems and motto seen on either side of the fuel tank. It also retains the same wheel design as before.

Despite having an LSPD livery on the bike, the only force to use it are the San Andreas Highway Patrol. 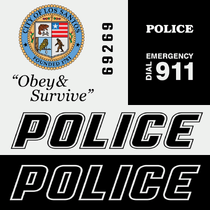 Being based on a Harley-Davidson Road King, the bike is somewhat heavy but high in power and torque, meaning its top speed and acceleration are average for motorcycles, but higher than most cars. However, the handling is excellent for such a heavy bike, with its powerful brakes being another positive. The bike can also withstand more damage than any other bike in the game, and takes virtually no damage when shot in the saddle bags.

The bike is powered by a V-Twin engine and coupled to a 5-speed gearbox. It also shares the engine sound with the Angel, the Daemon and the Wayfarer.

Returning to Grand Theft Auto V and Grand Theft Auto Online, the bike's acceleration and top speed capabilities remain unchanged. However, the response of setting off (including traction) has been greatly improved, and with GTA V's new handling physics, the bike is much more responsive for cornering and braking. Because of the bike's weight, the Police Bike is not a bike capable of successful or easy wheelies, often the bike attempts to pull itself back down when at high speed due to gravitational force, but it also tends to be sluggish at wheelies even at moderate speeds.

A Police Bike in a screenshot of Grand Theft Auto V.

A Motor Officer on his Police Bike in Grand Theft Auto V.

Trevor and Michael dressed as cops and riding Police Bikes.

Police Bikes in the enhanced version of GTA V. Note the red lights.

The Police Bike on the Rockstar Games Social Club.

The Police Bike on the updated Rockstar Games Social Club.

The Ballad of Gay Tony (multiplayer only)