The Police (or Police Car) is a prominent emergency vehicle appearing in the 3D Universe games.

The Police is the primary response police vehicle used by the city's police departments. The vehicle is generally known as the "Police", with the exception of Grand Theft Auto Advance and Grand Theft Auto: Vice City Stories, where it is referred to as the Police Car and VCPD Cruiser, respectively.

They have two sirens, one default "long-whirl", and the "rotating-weep", triggered by holding the horn button. The player will receive five rounds of ammunition for any weapon in the Shotgun slot after entering a Police car.

The general design of the Police varies in accordance with the games' settings, but they retain the same sedan design that is also shared with the Taxi. These renditions are based on real-life police vehicles used around their corresponding eras.

The Police resembles a cross between a Chevrolet Caprice and a Ford Crown Victoria. It is the primary vehicle of the LCPD between 1998 and 2001.

In Grand Theft Auto III, the Police features a black/white paintjob with "LCPD" and "POLICE" markings around it, reminiscent of most Californian police patrol vehicles such as LAPD and many Highway Patrol units. It has a red/white light bar on the roof, along with four additional red lamps and what appears to be a traffic advisor facing to the rear (though they flash red and blue lights when on). The Police was originally intended to have a blue paint scheme with white stripes, similar to 1990s/early 2000s NYPD police cars, however, this was changed shortly before the game's release.

In Grand Theft Auto: Liberty City Stories, the vehicle retains its black and white colour scheme, however as opposed to the white doors, the entire body is now black. The GTA III livery is also replaced with the original striped livery featured on the blue police car. The red lamps from the GTA III iteration were also removed.

The design of the Police is a combination of the front and rear of the fourth generation Ford LTD and the midsection of the GM-Opel Senator A. It is the standard vehicle of the VCPD between 1984 and 1986.

Both renditions feature a green and white livery with "City of Vice Police" markings on either side. The color choice appear to reflect the police cars used by the Miami-Dade Police Department (although the paint scheme seems to emulate the ones from the 1980s TV series Miami Vice). The Grand Theft Auto: Vice City rendition appears with a slightly worn appearance, while the Grand Theft Auto: Vice City Stories appears with a seemingly clean appearance. The lightbar is the same as the main light bar of the GTA III iteration, but featuring red, blue and white colours (though they only flash red and blue lights).

During development, the vehicle was white with red and blue stripes along each side, resembling squad cars from the Miami Beach Police Department. In the PC version of GTA Vice City, a rare all-white variant can be found parked at random locations.

All models have a black/white paint scheme reflecting LAPD police cars from the era, equipped with a red/blue light bar (again flashing red and blue lights). The side may have the corresponding city's department initials, along with the seal of the San Andreas Police Department. The LSPD version is used by the C.R.A.S.H. members.

The Grand Theft Auto Advance rendition of the Police is designed to bear a likeness to the Police from GTA III, with a generally rounded profile and a black-white paintjob. An identification number can be seen on the trunk.

Throughout all the 3D Universe games, the Police car is very fast, with excellent handling, and moderate durability. These stats make it great for drifting.

In GTA III, the Police car has suspension which is high and quite soft, and coupled with the vehicle's high speed, body roll is rather noticeable and can be an issue, as if the player is rammed in a police car whilst turning at speed, the car will probably roll over.

Despite the fact that the Police car in Vice City has an AWD layout, it lacks the stability of other fast AWD vehicles in the game (namely the Deluxo and Comet). This is due in part to its soft suspension and poor roll resistance as well as to its poor tire traction even at moderate speeds. As such, the Police is prone to roll over or spin at a moments notice, so it may be best to avoid drastic and abrupt maneuvers while driving it.

In GTA San Andreas, performance of all police cars are almost the same, retaining the same characteristics. The SFPD Police car, as stated above, has slighty higher suspensions than the LSPD version, allowing it to sort out small curbs, albeit it is not very noticeable.

Unlike other renditions, the car is substantially more speedy, with a top speed matched with the Banshee's.

Police officers in a Police car.

A close up of the LSPD Police car engine. 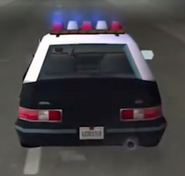 Rear view of the LCPD Police Car in the mobile version of GTA Liberty City Stories (note the lacked of the word "POLICE" which was added in a later patch).

Early design for the SFPD "Police" car which bears more of a resemblance to the Chevrolet Caprice than its final design.

Police cars are usually parked in front of police stations and are often locked. They also can be seen patrolling the streets and during wanted levels, mainly on one and two stars.