The police (also referred to as cops (most common), pigs, popo by Hispanics, babylon by Jamaicans, C.R.A.S.H., cherry tops, Five-O, one time, flatfeet, or heat) are uniformed officers responsible for enforcing the law. They ensure public and social order, through the legitimized and restricted use of force. The Police are present in all Grand Theft Auto games.

The main role of the Police in-game is to make crime difficult for the player - and to provide a brooding reliable enemy and a challenge both in and out of missions. They also make the game more realistic. This theme is present throughout the entire series, although the exact details vary between games.

The Police, (and all other forms of law enforcement in the Grand Theft Auto series), have been portrayed as corrupt, lazy, reckless drivers, stupid, selfish, incompetent, and trigger-happy, although the levels of these vary greatly between each game.

The Police works upon a Wanted Level system against the player. If the player is noticed performing a crime, he may gain a Wanted Star (increasing his wanted level). More serious crimes will grant a higher wanted level. Police responses vary depending on the wanted level, ranging from foot chases to calling in the helicopter, the FBI (FIB in the HD Universe) or even the armed forces (NOOSE in HD Universe)

If the player gets arrested by the police (or "Busted"), the player will respawn at the nearest Police Station, but lose some money and all of his weapons, except in GTA San Andreas if CJ is dating Barbara as she is a cop. Higher levels of law enforcement are not concerned with arrest, but with killing the player, although will attempt vehicular arrest If the opportunity arises. Death is only temporary, and results in being returned to a nearby hospital with the loss of weapons and some money (No weapons are lost in GTA IV). In GTA: Vice City Stories the player can pay a $2000 bribe to get their weapons back from either the hospital or police station.

Wanted levels can be reduced by the use of a Pay 'n' Spray. In GTA III, there may be rare occasions when police cars try to block the player's entrance to the Pay 'n' Spray, especially with higher Wanted levels. The Wanted Level in GTA IV system allows the player to evade a wanted level by escaping from a certain radius, based on the last place they were spotted. The higher the wanted level, the larger the area.

In the GTA III and GTA IV eras at 4-star wanted levels, heavily armed, highly trained police officers will come after the protagonist and try killing or sometimes arresting him. They all drive Enforcer trucks and are armed with weapons that will make short work of the player. Their Enforcers are fast and can smash up a vehicle in a small amount of time. Their trucks also form roadblocks. In GTA III, they have Micro UZis, Uzis in Vice City, Liberty City Stories, and Vice City Stories, and Mac-11's in San Andreas. SWAT teams are a real threat to the player and come in 4 men per team. Also, in Vice City and Vice City Stories, undercover "Vice Squad" officers armed with Uzis in Cheetahs will chase the player at 3 stars and above. Their cars are fast, and they come two per unit.

The Police AI is more advanced in Vice City Stories, rendering them more tenacious in pursuing the player, even at a one-star wanted level. It is nearly impossible to carjack a police vehicle with cops inside without being instantly busted, and cops will also more aggressively climb on board vehicles and otherwise pursue Victor, making getting busted more likely.

In GTA IV, whenever NPCs are arrested and escorted to the Police Vehicle, the Police Officer will usually drive the NPC criminal around the road without even making effort to transport them to the Police Station. The criminal will eventually get off If something interrupts the arrest, without even being treated as resisting arrest, probably because the Police (like Paramedics) weren't programmed to drive a NPC criminal to a station. NPCs arrested by hand however, are treated as resisting arrest, If the criminal is aggressive or escape, the Police will try to stop or kill them.

In GTA V, police officers now act aggressively towards NPCs, engaging in car chases and gunfights against pursuers. Like GTA San Andreas, choppers can be found flying around South Los Santos looking for crime. They can also be found in the skies during a pursuit, whether be an NPC or a protagonist. Unlike in GTA IV, the cops do not arrest NPCs and instead shoot on sight, whenever they are armed or not. This could be because the game may lack of "Busted" mechanic to NPCs. NPCs also react to cops unlike other games, such as prostitutes will not get into a player's car near cops, or if a police vehicle, driven by an NPC or player goes past them, they will flee the area. Families gang members will shoot at cops if they are pursuing Franklin on a 1 or 2 star wanted level, or if an NPC gang member is chased by cops, their homies will shoot at the cops. Cops also tend to be shot at when patrolling a gang neighbourhood. Strangely, cop cars are only usually found near stations, they are rarely anywhere in the city. If a person is killed on street, the police will examine the scene before leaving back to patrol, however this usually happen only if the police has shot and killed the person. If the Paramedics do not arrive to treat the wounded people, the police may radio one or leave the scene instead.

In GTA IV, the Police in Multiplayer Mode will not arrest the player, but will shoot at the player in an attempt to kill them, though they can still pull the player out of a car. At 4 stars the police send in an Annihilator with two NOOSE agents with assault rifles firing from the sides of the chopper. The police will arrive in cars containing two police officers. One will carry a Pistol while the other will (usually) carry a Pump Action Shotgun, regardless of what guns are allowed in the online game. NOOSE agents arrive in NOOSE Enforcers only, as the NOOSE Cruiser, the NOOSE Patriot, and the FIB Buffalo only appear in Race and GTA Race multiplayer modes, albeit they are only used by the players. NOOSE agents are equipped mainly with Carbine Rifles and SMGs, but sometimes they have a Pump Shotgun and NOOSE agents will sometimes fall back to their pistol if they lose their weapon. The FIB does not appear in multiplayer at all, and the Police Maverick also only appears in the Race and GTA Race modes. It is notable that Wanted Levels are usually cumulative if multiple players are riding in the same vehicle. When faced with multiple players with wanted levels, the police usually target the nearest player. The player can still use a Pay N Spray in multiplayer, though the same rules using them when police are nearby in single player apply to multiplayer as well. If the player is shot in a Deathmatch, it will count as a death on purpose and will lose $100. Police can be turned off online.

In Grand Theft Auto Online, the police are a constant threat, and cannot be turned off, though they don't appear in some missions and game modes. At one star, officers in the area will be notified and will patrol the streets searching for you. At two stars, the officers will actively search for you, going off roads and around buildings, as well as gaining shotguns. At three stars, a Police Maverick will be sent after the player, making escape much harder and hiding in bushes almost impossible. At four stars, NOOSE officers are sent after the player, as well as more helicopters. Police presence begins to weaken, with NOOSE chasing the player instead. NOOSE officers will be armed with Pump Shotguns and Carbine Rifles. At five stars, police will be almost completely absent, with NOOSE aggresively hunting down the player.

Anywhere City SWAT
Add a photo to this gallery

LCPD SWAT Officers
Add a photo to this gallery

Vice City SWAT
Add a photo to this gallery 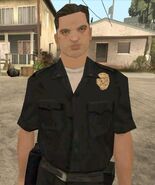 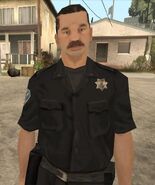 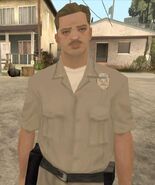 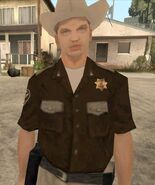 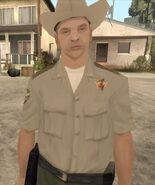 Desert cop (from the game files) 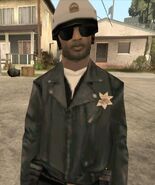 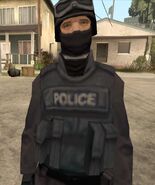 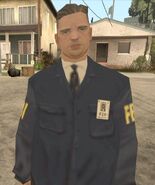 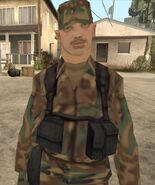 Army Soldier
Add a photo to this gallery 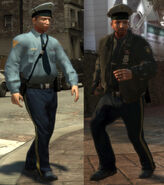 Alderney State Police officers
Add a photo to this gallery

A NYSP officer in the Prologue.

A Highway Patrol officer on his Police Bike. 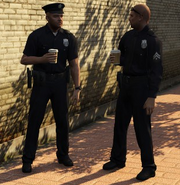 A NOOSE Officer armed with a Carbine Rifle in GTA 5.

A Military Officer in Fort Zancudo.

Wikipedia has an article on:
Police
Wikipedia

Retrieved from "https://gta.fandom.com/wiki/Police_(law_enforcement)?oldid=786084"
Community content is available under CC-BY-SA unless otherwise noted.