"In my work people change. Money changes people. Not me, though. I'm still a hustler from the streets."
― Playboy X

Trey Stewart was born in 1983 in North Holland, Liberty City. He was once very book smart as a child (in later years he would refrain from this positive work ethic) when he was eight or nine, he became close to the neighborhood's biggest drug lord, Dwayne Forge, who treated Stewart like a son and taught him how to sell drugs. Forge states that Playboy was always a bright kid, but he had no street knowledge so he taught him the rules of the game. When Dwayne was arrested, Stewart became the head of Dwayne's business interests. Playboy X was previously a small-time dealer, also robbing people for some time before taking over the cocaine empire and bringing it to new heights.

Leadership of the business

Under Playboy's leadership and rejecting Dwayne's old-fashioned views, the empire went from being exclusively about drugs to expanding into other realms of (even legitimate) business. Still having the most success in drug sales, he became friends with Elizabeta Torres and monitored all drug deals in the city. After 2004, he stopped visiting Dwayne in prison, and being at a selfish point in his life, probably bought his yellow Patriot within a year or two of that date.

Eventually he was introduced to Niko Bellic through a heroin deal and the two began a business relationship. Playboy X also makes a brief appearance in The Lost and Damned where Playboy refuses to meet Johnny Klebitz during the party.

Expanding into other businesses, Playboy even dreamed of leaving crime behind entirely to become a legitimate real estate developer and "see my name in big, gold letters!". He also explains his resolve to give money to poor young blacks and schools after he's wealthy to atone for selling drugs to children (although his penthouse and luxury car insinuate that he's already quite wealthy). He sought to win over Yusuf Amir, a billionaire property developer from Dubai. Amir was under intense pressure to cooperate with the Mafia, who had shut down his construction site under the guise of a union strike in order to extort funds from him. X believed he could manoeuvere himself into Amir's favor by employing Niko Bellic to dispatch the mob gunmen besieging the site. Niko vacated the site in Playboy X's mission "Deconstruction for Beginners", but Amir was unresponsive. Instead of rewarding X with shares in lucrative construction contracts, he permanently closed down the construction site in memory of those who had died. It is revealed in The Ballad of Gay Tony mission "For the Man Who Has Everything" that Amir continued construction on the soon-to-be Amir Towers.

Later, Niko was sent by X to exterminate Marlon Bridges. X also gave him a Whiz Wireless Cell handset to keep and so that X could assist Niko in the job, as it requires Niko to send an MMS which his second-hand Badger phone given to him by his cousin Roman is incapable of doing as it does not have a camera.

Dwayne's release from prison and The Holland Play

Eventually Dwayne Forge is released from prison and tensions rise between him and X almost immediately. Playboy ignores Forge and attempts to distance himself from his former mentor, leaving Forge feeling bitter, heartbroken and betrayed. Playboy is still the Boss of the North Holland Hustlers, as eventually Forge retakes his former base of operations, the Triangle Club, from associates of Playboy's, the Trunchez Brothers. Playboy is furious and it is clear that the bad blood between the former partners is going to come to a head.

Playboy X has a private conversation with Niko, claiming that Forge is talking behind his back and attempting to usurp leadership from him, even though he claims he offered half of the business to Forge. Though apparently very saddened by having to kill his mentor, he offers Niko $25,000 to kill Dwayne. Subsequently, Niko is also hired by Dwayne to kill Playboy X after word hits the streets that there is a contract out on him.

If Niko chooses to kill Dwayne, Playboy has a change of heart, upset that his "father figure" was killed. Presumably in denial, he blames Niko's cold-heartedness for the betrayal and although he pays Niko the $25,000 as agreed and wishes him the best, he cuts all ties with Niko and cannot be friends with him knowing he killed Dwayne. Later, his answering machine even claims that "you don't know what you got until it's gone."

If Niko chooses to kill Playboy, he shoots his way through Playboy's penthouse and corners him in an alleyway, easily executing him by shooting him in the throat, and thus, returning control of the North Holland Hustlers gang to Forge. As a token of his appreciation, Dwayne gives Playboy's penthouse (which he reveals he had the deed to all along) to Niko.

Playboy's death, if the player chooses.

The beta version of Playboy X alongside Niko.

Playboy X smoking what appears to be a joint. 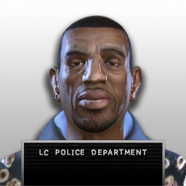 Beta clothes of Playboy.
Add a photo to this gallery

Retrieved from "https://gta.fandom.com/wiki/Playboy_X?oldid=1008409"
Community content is available under CC-BY-SA unless otherwise noted.