Playa del Seville is a neighborhood in south-eastern Los Santos, San Andreas in Grand Theft Auto: San Andreas. North of the area is the Los Santos Forum and East Beach. To the west, meanwhile, are the districts of Ocean Docks and Willowfield.

The district is a stronghold of the Seville Boulevard Families. Playa del Seville is a multi-racial community, with African-Americans making up the majority of the population.

The area contains a set of housing projects, a beach, a nearby busy road, a set of lock-up garages, a basketball court, a small street with some small single-family homes and a few small businesses and stores. Despite the ominous gang activity, the area is more middle-class than Ganton and the beach is a popular tourist destination.

Because of its beach location, its proximity to the docks, and predominantly being a residential district, Playa del Seville is primarily based on the San Pedro and Harbor City neighborhoods of Los Angeles. However, the projects buildings of Playa del Seville are reused from the Ganton Courts which are based on the Imperial Courts in Watts.

Playa del Seville does not feature much in Grand Theft Auto: San Andreas. During one mission, Carl Johnson rescues his brother Sweet and his girlfriend, from Playa del Seville (after Seville Boulevard Family members start attacking them). Other than this, Playa del Seville appears as the location of LB's garage, or the Lockup, where stolen items are kept. These include from Colonel Fuhrberger (during the mission Home Invasion) and when doing the burglary side mission. 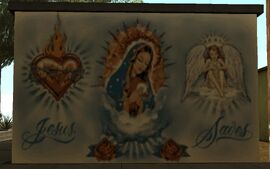 Jesus Saves Graffiti next to the barber in Playa Del Seville