The objective of the mission is to simply deliver pizzas stocked in a Pizza Boy delivery scooter to waiting customers on the streets throughout a region surrounding a pizza parlor within a time limit. The player has to perform a drive-by to deliver the pizzas; for convenience's sake, the mission disables any drive-by weapons if the player has any. Once the player completes a set of delivery orders, the player is required to return to the pizza parlor for the next level of orders, and if no pizzas are carried, six more pizzas, elevating the player to the next level.

To obtain the bonus health award at Pizza Boy level 10, with a total of 55 consecutive successful deliveries and return to the take-out window, must be completed in a single attempt in order for the player reach the ultimate goal of completing all 10 levels. The Pizza Boy rear box can stack six pizzas maximum and restock only when empty which emphasizes the need for the player to return to the pizza parlor to restock. The side mission begins at Level 1, when the player is required to only deliver a single pizza to one customer, with five remaining in the stack. Each mission adds one additional customer for each new level, while the time limit remains the same. Each successful delivery adds clock time. Pizzas could be pushed towards the customer at the expense of time and can also be wasted if thrown too far from a customer - a missed target can be a bigger waste of time.

In GTA VC, the mission can be started by hopping on any Pizza Boy parked at a Well Stacked Pizza. The reward for completing it is a health boost to 150 and $5000. The mission cannot be redone once it is completed. Apparently, the mission was intended to spawn a Pizza Boy at the Vercetti Estate after completion, but errors in coding prevented that.

In Grand Theft Auto: Liberty City Stories, this mission is started when the player hops on the Pizza Boy parked by the Joe's Pizza restaurant in Bedford Point. The mission works similarly to the Grand Theft Auto: Vice City version, and has the player delivering pizzas to pedestrians on the sidewalks, except that Toni has 6 minutes each level instead of 5. When completed, the player's health boosts up to 25 points and Joe's Pizza will pay protection money up to $2500 as an asset.

The Noodle Punk mission, located at Punk Noodles in Chinatown, Portland, is a similar side mission that has the same gameplay mechanics but sees Toni delivering noodles instead of pizza. 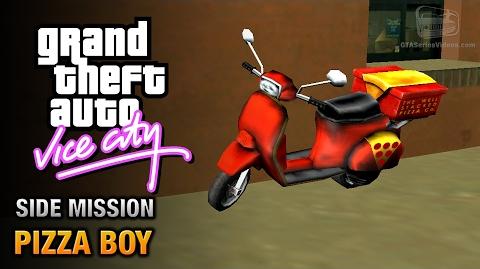 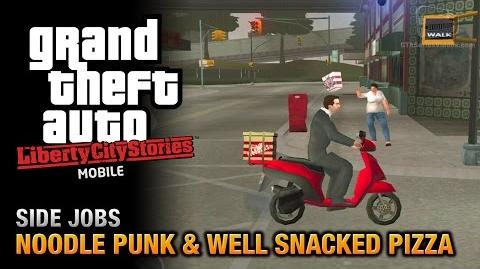