"We invite you to hear the future of music."
"Blow Me Down"
"Treasure Chest"
"Must Have Booty"

Pirate Music has its flagship store located in Star Junction. Despite the word "music" being in its name, Pirate Music also sells films, books and games according to branding.

They are one of the official sponsor of the CNT program I'm Rich.

In 2004, Goldberg, Ligner & Shyster filled a lawsuit against Pirate Music, claiming that they made a young boy named Nick Patterson become obsessed with Richard Wagner operas. Goldberg lost the case, because of a lack of "common sense".

The business returns to Grand Theft Auto V with two music stores in Little Seoul and in Burton, Los Santos. The store is Little Seoul is claimed to be the flagship store, even though its clearly not big enough for a flagship store in comparison to the one in Liberty City. 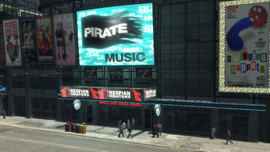 Star Junction, Liberty City.
Add a photo to this gallery 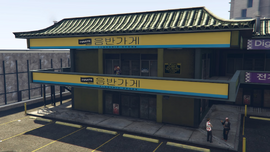 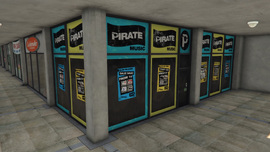 Hawick Avenue and Eastbourne Way, Burton.
Add a photo to this gallery 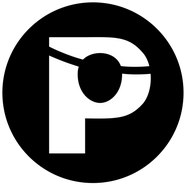 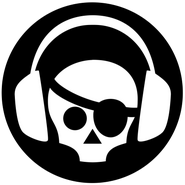 Another Pirate Music emblem.
Add a photo to this gallery

Retrieved from "https://gta.fandom.com/wiki/Pirate_Music?oldid=1258471"
Community content is available under CC-BY-SA unless otherwise noted.