Reaching Rank 1.
Playing as a VIP/CEO
Owning a private Yacht

In-game time
“Defend your Yacht from capture until the time runs out.”
— Work description.

Piracy Prevention is CEO/VIP Work featured in Grand Theft Auto Online added as part of the Executives and Other Criminals update.

“As requested, your Yacht is about to undergo a full "piracy prevention" safety check. Please stand by for attack.”
— SecuroServ text message.
“Piracy Prevention is attack and defense on the decks of a luxurious Super Yacht. Defending players spawn on the yacht while attacking players spawn on shore with access to boats, helis and Seasharks ready to head out and capture the upper deck.”
— Rockstar Newswire description.

Piracy Prevention sees an organization defending the organization's VIP's yacht from several attackers. The closest beach near the yacht will have several Seashark boats and Maverick helicopters for the attackers to use to get to the yacht. If the vehicles are destroyed, they will respawn a few moments later. Attackers have to board the yacht and stay in the upper deck area marked on the map for thirty seconds. If they are killed while capturing the deck, the timer will be reset until another player steps into the area. If an attacker is killed, they will respawn back on land closest to the yacht. Defenders will have to make sure the attackers don't capture the upper deck by any means necessary. Unlike the attackers, defenders will respawn on the yacht.

During Piracy Prevention, yacht defenses are disabled.[1] The player is unable to enter any Apartments, Garages, Bunkers, Facilities, Nightclubs or Offices or indeed their Yacht. They are, however allowed to access their Nightclub Garages. Los Santos Customs and Beeker's Garage are also closed, however other stores can be accessed.

Your VIP has started Piracy Prevention. Defend your VIP's Yacht

Upper deck on the map. 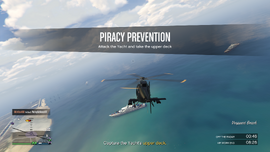