View source
watch 02:56
Raise a Floppa - The Loop
Do you like this video?
Play Sound
For a similarly named weapon, see Pipe Wrench.

The Pipe Bomb on the Rockstar Games Social Club website.

Wikipedia has an article on:
Pipe bomb

“Remember, it doesn't count as an IED when you buy it in a store and use it in a first world country.”
— Grand Theft Auto Online description on Ammu-Nation and Social Club.

The Pipe Bomb is a weapon featured in The Lost and Damned and Grand Theft Auto Online as part of the Bikers update.

“This explosive device is home made, but produces a large blast radius. This weapon is most effective when rolled under vehicles or thrown into areas with a high density of enemies.”
— The Lost and Damned Official Website.

The Pipe Bomb in The Lost and Damned is a homemade explosive made of a cylindrical piece of pipe filled with an explosive material and built as a tripwire-triggered bomb, evidenced by the small wire connecting the switch with one of the pipe's caps.

The Pipe Bomb returns in Grand Theft Auto Online, with almost the same design as in TLAD, only with a brighter appearance.

Pipe Bombs are a little stronger than Grenades, but they release smoke after they are thrown, giving away their position. They are also incredibly efficient when thrown into crowds of people as the smoke from the Pipe Bomb will blind them at close range. The Pipe Bombs have a 4-second detonation time, just like the Grenade.

The Pipe Bomb is almost the same as in TLAD, but has a few changes over other conventional thrown weapons. The simplified built allows the player to throw them much faster than a conventional grenade and explodes at half a second after landing onto a surface, which is perfect for Drive-Bys and long-range throwings. However, its blast radius is rather small compared to that of the Grenade or the Sticky Bomb, slightly damaging an unarmored vehicle if caught on the "edges" of said radius. The Pipe Bomb also leaves a trail of fire after exploding, which is good for fire traps, although much smaller than that of the Molotov Cocktail. 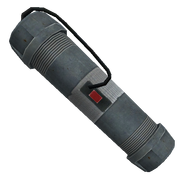 Aiming with a Pipe Bomb