GTA Wiki
Register
Don't have an account?
Sign In
Advertisement
in: Side Missions, Missions in GTA San Andreas
English

View source
watch 02:34
Fire Emblem Warriors: Three Hopes - The Loop
Do you like this video?
Play Sound
For the Empire side mission in GTA Vice City Stories, see Prostitution.

Carl receiving a cut from one of the prostitutes.

Pimping is a side mission in Grand Theft Auto: San Andreas that consists of driving prostitutes to meet their clients. The mission can be triggered in any of the main cities in San Andreas while driving a Broadway, but not when in the countryside.

There are only two prostitutes who need to be driven around, and while there is a time limit similar to the Taxi Driver missions for dropping them off, there is no time limit for picking them up, which allows the player to repair the vehicle at a Pay 'n' Spray if necessary. It should be noted that if the player uses the Pay 'n' Spray during the mission then the first visit is free, though every subsequent visit will cost the normal $100.

After some sessions, the player may be required to either kill a client attacking the prostitute, or chase down a client who tries to escape without paying.

Rival gangs will not attack the player during pimping missions.

Completion of the pimping missions is required for 100% completion.

Upon collecting a prostitute after a successful session, she will give Carl a $300 cut of her fee. Each subsequent session will increase the multiplier for the player's cut, so after the second session the cut will double to $600, then triple to $900 after the third, with a cut of $3,000 awarded after the tenth session. 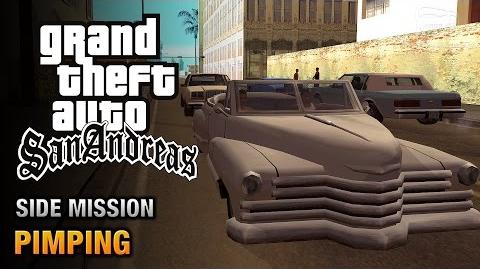