“French design and Italian construction, so expect style over substance and regular breakdowns. The Pigalle, a high performance coupé, is an icon of 70s motoring and bad taste. No wonder the ironically disposed love it.”

The Pigalle is based on the European styling of the Citroën SM in the front, while the greenhouse shape and rear resemble the Maserati Merak, Ghibli I and Lamborghini Espada (although the rear fascia most closely resembles that of the Ghibli I).

The car is distinguished by its long body and the yellow lamps, which is a feature common on French vehicles during the 1970s. The lower area of the front end features a small splitter and a central meshed intake, which spans about one-third of the car's width and houses two fog lamps on either side. The bumper covers the front and part of the front quarters of the vehicle, which is finished in chrome and has plastic strips on the outer portions, as well as a set of rectangular indicators on the outer sides. The upper area is surrounded by a chrome trim and features an inset central section for the European license plate, two slatted grilles with horizontal separations and four square headlamps, with the inner ones being a bit smaller. The bonnet is relatively long and has two mesh vents near the windscreen.

On the sides, the car features slightly flared arches and badges on the rear fenders, displaying the car's name. The doors are also long and are fitted with traditional chrome handles and circular rear-view mirrors. The greenhouse area spans about two-thirds of the car's length and features chrome trim around the windows and inner pillars, with black wide ones separating the door windows and the rear-quarter windows. There is a rear hatch that has an elevated profile on the rearmost section.

The rear end of the car bears a central badge just below the hatch that displays the manufacturer name, while a sectioned panel houses the central European license plate and the two red rectangular lamps. The rear bumper has similar features to the front one, having rectangular reverse lights on the outer sides. The lower area has two mouldings for the exhaust tubes. Its interior is shared with cars like the Dominator and Buccaneer.

Overall, the Pigalle is better performing than its initial appearance may imply. It has good acceleration for its class, and Super-level top speeds. It handles well as a result of its high traction levels compared to other Sports Classics, attributed to its reduced engine power and low center of gravity. However, the front wheel drivetrain limits the car's turning circle and overall handing. Understeer is an issue with the Pigalle, but it is not as punishing as other Sports Classics when attempting to carry speed. The braking distance is remarkably good for a Sports Classic. Crash deformation is acceptable.

The car is powered by a single-cam V8 engine, coupled to a 5-speed gearbox in a front wheel, front wheel drive layout. Its engine sound is smooth and low-revving, appearing to be a variation of the one used in the JB 700 and the Stirling GT, without the loud engine tones from the aforementioned cars. If the turbo upgrade is installed on the Pigalle, it will feature compressor surges (creating a fluttering "whistle" sound) rather than a blow-off valve (which creates a distinct "hiss" sound when letting off the accelerator). This also occurs with the Warrener. 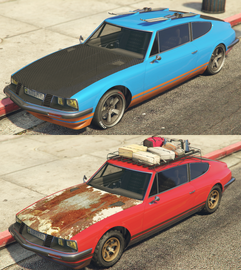 Possible combinations of modifications that can be given to the Pigalle. (Rear quarter view)

The Pigalle in the Xbox 360 and PlayStation 3 versions. (Rear quarter view) 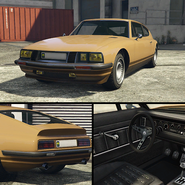 The Pigalle on the updated Rockstar Games Social Club.

The Pigalle in the cinematic preview on GTA V Rockstar Games Social Club.

The Pigalle in the cinematic preview on GTA Online Rockstar Games Social Club.