View source
For the location of the same name, see Pier 69.

Carl Johnson and Cesar Vialpando shortly before they attack Pier 69.

CJ: "You sold us out, Ryder! You fucked with us all!"
Ryder: "I'm a motherfucking genius!"
―Carl Johnson confronts Ryder, while the latter tries to make his escape.

After finding out of the next meet between Big Smoke's lieutenant Ryder and the Loco Syndicate through killing Jizzy B., Carl calls Cesar to inform him of this. After Carl and Cesar meet up on a rooftop across from Pier 69, Carl gets there and uses a sniper rifle to gun down the San Fierro Rifa taking the guard over the pier, so that Mountain Cloud Boys acting as the backup can move in. T-Bone shows up with some Rifa, as does Ryder with two Tahomas full of Ballas along with one riding shotgun in his Picador. The last to show up is Toreno who arrives by helicopter. Toreno sees the bodies on the rooftops and is alerted, so Carl and Cesar fight their way through Pier 69 until they confront T-Bone. The two gun him down, then Ryder attempts to escape by a boat, but Carl chases him down and kills him in revenge for betraying the Grove Street Families.

The rewards for completing this mission are $15,000 and respect increase. The mission Toreno's Last Flight is unlocked. 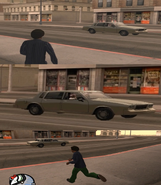 Ballas in San Fierro who were left over from the mission. They are driving away.