“1960's entry in a long, esteemed line of Cheval coupé utility vehicles. Combining all the style of a two-door hardtop with the practicality of an integrated cargo tray, this most certainly isn't a jack of all trades and a master of none.”

The Picador may occasionally be depicted with different items on its bed, such as planks or Sprunk cans. The vehicle is seen in a variety of primary colors on the body, as well as secondary colors on the inner bed walls and wheel wells (though this color cannot be changed through a mod shop).

In Grand Theft Auto V and Grand Theft Auto Online, the Picador retains the essential ute design, taking design cues from the Holden HJ[1], Holden HK[2] and Chevrolet El Camino utilities in keeping with Cheval being primarily based on GM-Holden. The rear fascia and tail light design is almost identical to that of the 1969 Chevrolet El Camino[3], while retaining the overall shape and size of the later model Holden. The front end has references to the 1967 El Camino in the headlight and grille assembly[4], with some similarity to the the rarer dual headlight version of the HK Holden[5].

The Picador's design is generally narrower than the GTA San Andreas iteration, featuring a silver front bumper with a wide vented section holding two square amber signals on the edges and a plate holder on the center. The upper area consist of a grilled section with a wide divider on the middle and the Cheval emblem on the center, along with four circular headlamps on the outer edges. The bonnet has a slightly bulged profile and features a vented section near the windshield.

The sides of the vehicle are very simple in design, featuring small flares around the upper sides of the wheel arches and inset/ridged details on the skirting area, as well as horizontal door handles and circular rear-view mirrors near the A-pillars of the cabin. The cabin area is relatively small, featuring silver trimming around the windshield and rear window, while the sides appear to use dual trimming; thinner trim around the window glass and wider around the actual door frame, seen in the small gaps next to the door windows. The area behind the cabin is occupied by a small truck bed with the wheel wells on either side.

The rear end of the car mostly consists of the tailgate, which has a black panel with silver upper and lower borders and a plastic middle strip, as well as the Cheval badges on the center. The rear quarters of the vehicle are occupied by square-shaped red marker lamps, which also have silver trimming around. The rear bumper is finished in silver and houses two rectangular brake lamps near the edges and the license plate on the center, while two exhaust tubes can be seen below. In the enhanced version, the car uses the same interior as the Bobcat XL.

The vehicle only has a primary color, which is applied on the entire bodywork. It also uses a set of five-spoke rims wrapped in low-profile tires, which is unique in design compared to certain muscle rims seen in Los Santos Customs and other mod shops.

The Picador has the highest top speed and acceleration for any pickup in the game, possibly due to the large V8 engine. However, it is also the lightest and lacks the torque of the stronger trucks; its cornering is also a little unstable, owing to its rear-wheel-drive layout. The Picador can only carry two in the cab.

The Picador's speed and acceleration are good in comparison to most street cars, especially when upgraded, but it is heavily outclassed by other muscle cars. Its handling is at odds with more conventional muscle cars, since its four-wheel-drive system gives it excellent traction and launch speed. This, combined with its soft suspension, makes the Picador one of the best muscle cars for offroading, though one must be wary of body roll. Crash deformation is poor and bullet resistance is only average.

The Picador is powered by a large displacement V8, and it shares its engine sound with the Sabre Turbo, Fugitive and Gauntlet. 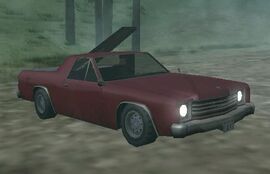 The Picador as seen in the GTA V trailer "Franklin".

Rear view of the Picador as seen in the GTA V trailer "Franklin".

The Picador on the updated Rockstar Games Social Club.

The Picador in the cinematic preview on the Grand Theft Auto V Rockstar Games Social Club.

The Picador in the cinematic preview on the Grand Theft Auto Online Rockstar Games Social Club. 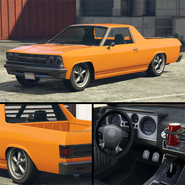 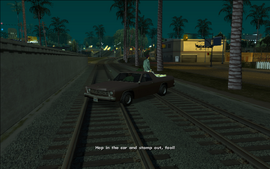 Ryder's Picador, as seen during the mission Catalyst.