No
“Baby boomer teen dream repackaged for the mass market generation. A muscle car without the muscle that's the rental vehicle of choice for tourists looking for a slice of "real" Americana. Get it with exclusive Pisswasser Livery.”
— Southern San Andreas Super Autos description.

The vehicle is exclusive in Grand Theft Auto V for players returning from Xbox 360/PS3. It appears during the Stock Car Races and will become available in each protagonist's garage once the player wins the 3rd stock car race.

The Pisswasser Dominator is essentially a Dominator with a Pißwasser racing livery, sharing the same derivatives. The stock car may be modified further in Los Santos Customs including the ability to respray the underlying color. The sponsorship decals can not be changed or removed.

The Pißwasser Dominator has the following minor sponsors:

Like all of the race version of vehicles within GTA V, the race version sports massively improved performance over the standard Dominator, having much better braking (one of the best of Muscle cars in the game) and improved acceleration, as well as a higher top speed, to such a point it is one of the fastest cars in a straight line. However, the vehicle still suffers from poor traction due to the engine's immense torque. The vehicle's mass is also slightly decreased, compared to the base model.

*The Pißwasser Dominator is limited to only the Classic, Matte, and Metallic color options. All color choices keep the liveries on the car intact. 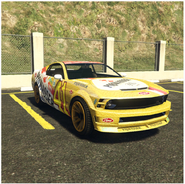 The Pisswasser Dominator on the updated Rockstar Games Social Club.