• ­Go to the basketball courts on Exeter Avenue.

• ­Take a picture of the gang members and send it to Playboy. Don't get too close.

"Photo Shoot" is a mission in Grand Theft Auto IV given to protagonist Niko Bellic by Playboy X from his penthouse on Xenotime Street in Northwood, Algonquin, Liberty City.

Playboy suspects that drug dealer Marlon Bridges has been 'snitching' on him. He wants Niko to go to the Swinger Park basketball courts on Exeter Avenue and kill Bridges and his friends. Niko doesn't know what Bridges looks like and after unsuccessfully trying to describe him, Playboy gives Niko his camera phone, so that Niko can take a picture at the basketball courts to allow Playboy to inform Niko which one is Bridges.

Niko goes to the Swinger Park and approaches the basketball court without entering it and, using the camera phone, takes a photograph of the three men standing in a group in the park and sends it to Playboy X.

Bridges has two armed bodyguards who will start shooting at Niko if he gets too close or fires a shot in Bridges' direction. At the same time, Bridges will escape on foot.

Niko waits outside the courts and once Playboy X identifies Bridges, Niko kills him, his bodyguards will go after the player who must escape the area to complete the mission. 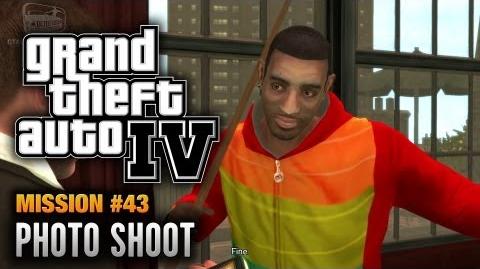 Retrieved from "https://gta.fandom.com/wiki/Photo_Shoot?oldid=1299078"
Community content is available under CC-BY-SA unless otherwise noted.