The Phoenix is based on the Pontiac Trans Am (also known as Pontiac Firebird) and 1982-1992 Chevrolet Camaro, but the round tail lights are similar to 1970-1973 Chevrolet Camaros.

The Phoenix is distinctive by its angled front and flat rear end, sporting rectangular headlights, circular tail light and side trim detail. The vehicle has been changed slightly throughout the games, with a rear deck lid blackout panel in GTA San Andreas, and a thinner stripe in GTA Vice City Stories. The car is distinctive by its hood scoop, where in GTA Vice City it is fully functional.

The car can spawn with single colors or a two-tone paintjob, where the secondary color is applied in the form of a stripe passing through the hood, the roof and the rear.

The vehicle assumes a slightly larger bodywork with a similar shape to the 3D Universe renditions, where the front end has a more vertical profile with a pointy shape around the center. The lower area is predominated by a bulky bumper with a central wide intake and a plastic lower section, while the upper area is predominated by the dual meshed grilles bearing the corresponding badges and the chrome inset housings with circular headlights. The hood slightly curves towards the front and has a small bulge that slightly elevates as it approaches to the windshield, with a decal on the driver-side front displaying its name.

The sides of the car are very similar to the 3D Universe model, with flared arches and elevated rear section, along with additional manufacturer badges and the "Phoenix" decals on the front fenders. The greenhouse area is relatively short and wide, where the rear section features a curved profile with additional badges next to the door windows. The roof has sectioned panels on it.

The rear of the car is similar to the 3D Universe iterations, featuring a slanted rear end with a blacked-out panel identical to the GTA San Andreas version. A set of circular tail lights with chrome trim and inner reverse/turning lights can be seen on either side, along with a central plate holder. The lower area of the bumper has two small cut-outs for the exhaust tips. On the underside, two exhaust pipes runs across the car and ends in two exhaust silencers, which both splits into two long pipes, resulting in four tail pipes that are seen under the rear bumper. The car prominently spawns with a ducktail spoiler.

Like its 3D Universe iteration, the car may spawn either with a single body color or with a randomly colored stripe in the middle, where it is determined by the secondary color when modified at Los Santos Customs. The decals displaying its name are also painted with the secondary color. It uses a unique set of wheels consisting of numerous rims crossing at each other, forming various pentagons and triangles around the center.

The Phoenix is acceptably fast, however has great acceleration and torque, offset by having somewhat of a loose rear end. It has a top speed of 200km/h, faster than other comparable muscle cars such as the Sabre, Clover, and Stallion, which all share a top speed of 160 km/h. This makes it a great vehicle for drifting with. The Phoenix drives and sounds as if it is powered by a large supercharged engine, and also features a large air scoop for the carburetor. It can also be modified in TransFender in GTA San Andreas with nearly all of the available options for customization, but most of the categories have only one option as with most car customization in San Andreas. Like most muscle cars, it has a two person capacity. On the downside, the brakes are not as good as the other sports cars in GTA San Andreas. According to the files, the mass is 1400kg in GTA Vice City and 1500kg in GTA San Andreas.

With the exception of GTA San Andreas, all of the Phoenix's 3D Universe appearances bear a sports/high end car's engine sound rather than the iconic V8 muscle car engine the car is associated with.

The Phoenix has a high top speed and decent acceleration. It also has excellent torque and can climb steep hills with ease. Unfortunately, it suffers from poor handling. Its poor weight distribution and light rear end leads to severe oversteer, especially at high speeds. Its back end is prone to fishtailing, and crashes and spin-outs may occur more often than usual in this car. The durability is below-par, and it is prone to frame loss (fenders, bumpers, hoods, etc.) in event of a rollover accident.

It highly benefits from customization, as its acceleration can be topped with the right modifications. In essence, the Phoenix is quite similar to the Ruiner, however the Ruiner is generally superior in all areas. Thus, the Phoenix is better suited to more mundane roles, such as cruising at intermediate speeds. Despite this, the Phoenix can still be a competitor in the right hands, especially in races with more straights than corners.

The Phoenix is powered by what is stated to be a V8 turbo, somewhat true to its engine model, which is coupled to a 5-speed gearbox in a front engine, rear wheel drive layout. Its engine sound is of a high-performance engine, similar to the Ruiner and the Dominator in that aspect.

The Phoenix can only be modified in a TransFender garage.

NOTE: Las Venturas Transfender will charge 20% more (except for colors) 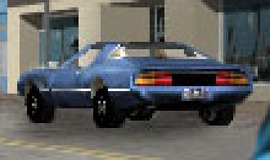 A pre-release screenshot of the Phoenix in GTA Vice City, depicted with cluster tail lights.

A Phoenix lacking a spoiler.

The Phoenix on the updated Rockstar Games Social Club.

The Phoenix in the cinematic preview on Rockstar Games Social Club.

The Phoenix is an extremely rare car, akin to the Euros, Berkley's RC Van and Hotknife.