Inga Ballard
“This cannot be traced back to me... I cannot believe I said that...all that fucking ethics training.”

Phoenicia Rackman is a character in Grand Theft Auto Online, introduced in The Doomsday Heist Update.

Being a covert agent in the International Affairs Agency, very little is revealed about her background.

During the finale of GTA Online: The Doomsday Heist Act 1, The Data Breaches, Rackman is first seen entering the war room of an IAA facility that was taken over by mercenaries, initially suspicious of the players' presence at the facility and holding them at gunpoint until Agent 14 vouches for them. Not long after, Avon arrives and the group discusses the attack that just took place. Rackman believes that it was orchestrated by the Russians, which Avon concurs, stating that he thinks the person behind it was a man named Bogdan.

During the opening cutscene of Act 2, The Bogdan Problem, Rackman supervises a meeting in the player's facility between herself, Agent 14, Lester Crest, Avon Hertz, and the players. During the meeting, she informs the group about the kidnapping of one of her agents, who was investigating data breaches in their department. Although reluctant to do so, she clears Lester and the players to steal whatever necessary for the heist, before leaving.

After Avon reveals during the Finale of Act 2 that he was the one responsible for the attack on the IAA facility, Rackman meets with Lester, Agent 14, and the players at Devin Weston's hangar. After berating 14 for complaining about his career now being in ruins, she gives Lester the authority to take any actions needed to stop Avon, and reassures him and the players that they will all be paid. After wishing them luck, she and 14 leave.

During the opening cutscene of Act 3, The Doomsday Scenario, Rackman once again meets in the player's facility, although this time only with Lester, the players, and Bogdan, who joined the crew after it was revealed that he was not behind the IAA facility's attack. She explains that Agent 14 was kidnapped by Merryweather Security, who plan to sell him to Avon, and that he needs to be rescued, or else the players and Lester will not get paid. She also instructs the players to steal a Chernobog in order to protect the other kidnapped agent, ULP, while he returns to safety.

During Setup: Rescue Agent 14, Rackman talks to the players throughout, frequently emphasizing that Agent 14 must not be killed. Once the players successfully save 14, Rackman expresses her gratitude for rescuing him without any IAA agent casualties.

During Setup: Escort ULP, Rackman oversees the escort of ULP to a safehouse. During the escort, she, Lester, and Bogdan give orders to the players as they use the Chernobog to shoot down enemy helicopters. Upon reaching the safehouse, she informs the players that ULP will be in hiding until Avon is dealt with, as his men will be looking for him. Before departing, she addresses ULP by his real name, Bernard, telling him to stay safe.

During Setup: Air Defenses, Rackman, Lester, and Bogdan oversee the players as they destroy a number of SAM turrets on Mount Chiliad. After the players are finished, she and Agent 14 meet them at the Sandy Shores Airfield, where she once again berates 14. She requests a status report from Lester, who explains that he's having trouble tracking down Avon and his AI, Cliffford. Rackman asks why they can't just unplug Cliffford, to which she is informed by Lester that it does not work that way.

During the Finale of Act 3, after Avon's location was tracked down, Rackman, along with Lester and Agent 14, talk with the players as they assault the Mount Chiliad Launch Facility, from which Avon plans to launch a missile. After Avon is killed and the last remaining code of Cliffford is destroyed, the players fly to the Galileo Observatory on Thrusters, to meet with Rackman, 14, and Lester. Lester expresses his excitement, believing that he will get to keep one of the Thrusters, but is told by 14 and Rackman that they are government property and will need them back. At the observatory, once Rackman confirms with Lester that Cliffford is gone, she explains that none of what happened will go on record. She thanks the players and Lester for their hard work and promises that they will be paid. After threatening to fire 14 for his role in letting Avon into the government and reassuring Lester that his money will be sent to him, Rackman and 14 leave.

Rackman is a senior agent or supervisor in the IAA. She has a no-nonsense attitude and is often seen on her IFruit phone giving orders. After their first ever meeting, Lester describes her as clearly the one wearing the trousers in her working relationship with Agent 14. 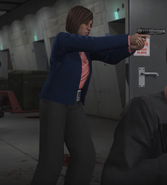 Rackman with Agent 14, Avon, and Lester in the player's facility.

Rackman meets with Agent 14, Lester, and the players after Avon's betrayal.

Rackman and Agent 14 at the Sandy Shores Airfield.

Rackman meeting with Agent 14, Lester, and the players at the end of The Doomsday Scenario.