Phnom Penh '86 is a mission in Grand Theft Auto: Vice City given to protagonist Tommy Vercetti by drug baron Ricardo Diaz from his mansion on Starfish Island, Vice City.

Diaz is aggravated by some Streetwannabe gangsters who try to screw with him. He orders Tommy to go to Prawn Island and kill the gangsters. He wants Tommy to fly there, using the help of his associate, Lance Vance.

Tommy and Lance travel to Prawn Island via helicopter from the mansion. Once they arrive, Tommy uses the M-60 to take on little groups of the gang on the roofs. Once Tommy has cleared enough of the gang, Lance drops him on the ground to retrieve the money in the building. Once entering the building, Tommy takes out any remaining hoodlums inside. He fights his way through the gang house, and eventually makes his way up to the roof where he picks up the cash. Lance then quickly shows up and takes Tommy back to the mansion

Colonel Juan Cortez: Tommy, it's me, Colonel Cortez. Look señor, I believe you are a man who can get things done. So please help me. You can find me at the boat.

The reward for this mission is $ 2,000. The missions Sir, Yes Sir!, Two Bit Hit and The Fastest Boat are unlocked. The player may now also access the Vice City Mainland. The player can also keep the M-60 from the mission.

Tommy Vercetti shooting at members of the Sharks gang

The orange slide-door Maverick
Add a photo to this gallery 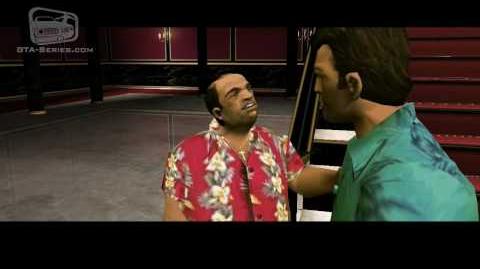 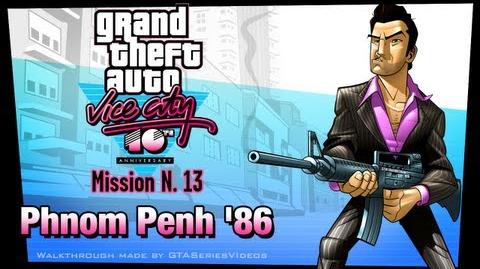 Retrieved from "https://gta.fandom.com/wiki/Phnom_Penh_%2786?oldid=853426"
Community content is available under CC-BY-SA unless otherwise noted.