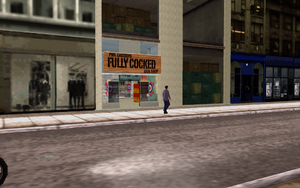 Toni Cipriani goes here to get a flamethrower, which Donald Love has already paid for, in the mission Friggin' the Riggin'. In this mission, he has to burn some ballot papers and destroy printing machines and vans which are owned by the Forelli Family. Toni later supplies weapons to Phil during the mission More Deadly Than the Male, stealing them from the Yakuza on orders from Toshiko Kasen. The second floor of the store is the location of a Hidden Package, needed by the player to collect in order to achieve 100% Completion.

By 2001, the setting of Grand Theft Auto III, the business has closed down and the building is empty as Phil has moved to a new location in Rockford, named Phil's Army Surplus. However, it is still accessible and once again includes a hidden package on the second floor.

Retrieved from "https://gta.fandom.com/wiki/Phil_Cassidy%27s_Fully_Cocked_Gun_Shop?oldid=1190387"
Community content is available under CC-BY-SA unless otherwise noted.