None
Phil Bacerra is, in 2008, a Chinese criminal in Liberty City who is wanted by the LCPD for a hit and run. He can be killed by Niko Bellic.

Bacerra is not a Chinese surname, as most modern Chinese surnames are one syllable, with only a few two syllable surnames. Rather, Bacerra is a Filipino surname. It is likely that Rockstar used a generic Triad member model for him because there are no stated ethnicities of most pedestrians.

Phil Bacerra does not look like his mugshot picture, although this is common amongst Most Wanted criminals. His in-game appearance is shared with Noel Katsuda, while the in-game Noel bears a close resemblance to Phil's mugshot, suggesting an error on Rockstar's part. 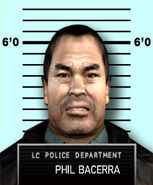 Phil in his Bobcat with his crew.

Close-up to Phil driving the Bobcat. 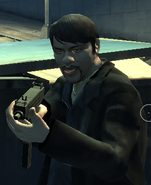 Shooting at Niko.
Add a photo to this gallery

Retrieved from "https://gta.fandom.com/wiki/Phil_Bacerra?oldid=1180725"
Community content is available under CC-BY-SA unless otherwise noted.